Shade is a poker movie that was released in 2003 and set in martini bars and clubs of Los Angeles. The movie was written and directed by Damian Nieman, and stars Thandie Newton, Gabriel Byrne, Joe Nicolo, Melanie Griffith, Jamie Foxx, George Tovar, and Carl Mazzocone Sr. Shade is about two hustlers, Thandie Newton and Gabriel Byrne who want to beat The Dean, played by Sylvester Stallone, in a high-stakes poker game. They hire two other scam artists to help them with their con and the chaos begins.

Shade first premiered at the CineVegas Film Festival in 2003 to mixed reviews. As you watch the movie, the plot is less important than the actors and their characters. Thandie Newton seems to be the only one taking her part overly serous, while the others add some comedic value to an otherwise dramatic poker movie.

Shade opens up with a flashback of Dean playing in an illegal underground poker game that is run by the mob. He is winning the game, but then robbers come in and force everyone to put up their hands. It is then that the mob realize he had a card hidden. The robbers and mobsters start shooting, leaving just Dean and one of the mobsters pointing guns at each other.

It then flash forwards to present day where Charlie (Gabriel Byrne) and Tiffany (Thandie Newton) are running small time cons. They meet Larry Jennings (Jamie Foxx) and convince him to help them with a soft game, earning a profit of $10,000 each. Before too long, they start working together, conning different casinos out of money, until they decide on a big scam with Dean. Over the next several scenes, many games are played and some lives are lost. In the final hand of the last game, Vernon their other partner, is playing against Dean. He is confident about being able to muck a card and hide it from Dean, before Dean wins the game and proves he had his own tricks up his sleeve all along. In the end, you find out the entire thing was a scam done to get rid of Charlie and Tiffany.

Overall, Shade received good ratings by critics and reviewers. Rotten Tomatoes gave it a 71% fresh rating and most critics liked the movie. Unfortunately it was only released in 6 theatres, earning a total of $459,098 over 5 weeks. It was then released on DVD where it continues to get notice. The next time you need to find a fun film to watch on a rainy day, consider Shade, which is not difficult to find on DVD or rent online or on TV. How can a movie in martini bars not be interesting to watch? In our humble opinion, it receives an 8 on our scale of 10. 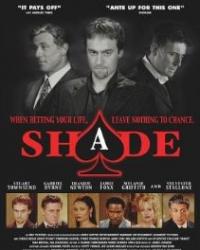