Brilliant acting and a slew of awards should be enough to entice anyone to watch this film, lover of gambling movies or not. Of course, gambling isn’t the main subject of the film, but one of the many themes that drives this fil to the top of the list for movies of the year.

Robert DeNiro only plays a supporting role in this film but he is one of several actors who scores a touchdown in this story of a young man battling to regain all he has lost in life.

Pat Solatano (Bradley Cooper) is at the center of the movie, and any fan of his would agree this is his best performance to date, and what a supporting cast he gets to work with.

When Pat is released from a state institution, he is on a mission to reconnect with his wife. Soon he meets Tiffany (Jennifer Lawrence) who agrees to help him reconnect if he helps her out in return. Pat’s parents just want him to be happy but they are forced to witness his struggles with life. His Father (DeNiro) portraits a die-hard Philadelphia Eagles fan who would love nothing more than to sit and watch a game with his son.

Soon enough, sparks fly between Pat and Tiffany, resulting in an unexpected relationship. But Pat is still intent on reconnecting with the wife he lost before his nearly year-long stint in the institution. As the Eagles dreadful season and his strife plods along, his life goes in a direction he didn’t anticipate, and one he can’t control. Maybe what he desires is right before his eyes, and with the support of those he loves, he might just see it.

This movie brought in $131.9 million at the US box office, so it’s fair to call it a blockbuster. It took in dozens of awards internationally, including the Academy Award to Cooper for Best Actor, and the British Academy Film Award for to David O. Russell for Best Adapted Screenplay. Jennifer Lawrence received several Best Actress awards and heck, the movie also includes Chris Tucker. Good drama, humor and a feel-good message makes Silver Lining Playbook a must-see for all movie-lovers. Plus the storyline of how the Eagles’ season affects heavy betting Robert DeNiro’s life is something many of us might find endearing. 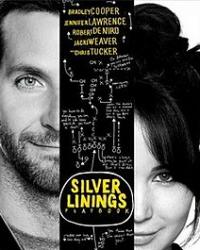