Indie director Alex Hennech’s 1996 film Smart Money shares a name with 1931’s classic mobster flick, and quite a few plot points as well. While the 30’s version was a major Hollywood release, 1996’s version flew under the radar, but is definitely a movie sports gaming fans will enjoy thanks to the high stakes nature of sports betting playing a big part. In the film sports betting is compared to stock trading, and for anyone who has experienced the up and down nature of both, it’s an apt comparison.

As a movie watching experience, Smart Money has the feel of an indie, almost personal, movie. The actors are complete unknowns, but this actually works in the movie’s favor. With such wild-card characters, you truly buy into the plot and end up pulling for the main protagonist. After all, if the main guy is Brad Pitt or Tom Cruise, you’re almost 100% sure that they’ll make it to the end unscathed. With this film however, you never know where Hennech will lead you.

New York city is the place where dreams can come true, if you’re willing to do whatever it takes to make it happen. Jimmy (Santio East) is a streetwise kid who has dreams of gaining great power by joining the New York Commodities Exchange. If he can just make it there, the wealth will come. Standing in his way is the $50,000 fee to gain a seat on the Exchange. Along with his friend Sal (Bobby Kaman) they begin to work for Charlie (Sam Dobbins), a sports betting bookie who seems at first to be well connected to New York’s criminal underground, but is he?

Jimmy falls in love with Rachel (Lira Angel) and all seems to be on track to certain success. At least that’s the case until the mob decides to out muscle Charlie and take over his racket. When the police swarm in, the entire house of cards looks ready to collapse. As Sal tries to play both sides of the mob and police against each other, Jimmy is left with a difficult decision to make: does he back up his friend and risk everything on a game of chance, with the possibility of his dream in the balance, or does he back out and run away with Rachel?

Scared Money Doesn’t Make Any, but Does Smart Money Make a Good View?

Everywhere you turn nowadays you see stories about Wall Street greed and the corruption of insider trading, but 1996’s Smart Money was telling that story during a time when things were actually going pretty good for the economy. When Jimmy and Sal talk about how sports betting loan-sharking is really no worse than what traders on Wall Street are doing, it’s hard to disagree. This movie is indie to its core, but it’s a solid view for crime and sports fans alike. You won’t be able to find it at most video stores, so check it out on Amazon and Netflix. 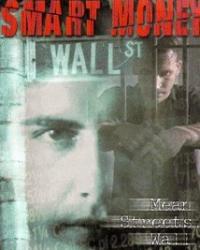