Swingers is a comedy drama released in 1996 and starring Vince Vaughn, Jon Favreau, Heather Graham and Ron Livingston. Doug Liman directed the film, while Jon Favreau wrote the screenplay. Swingers is about unemployed, single actors who live on the east side of Hollywood during the 1990s when the swing revival was occurring. Jon Favreau plays Mike who broke up with his girlfriend behind in New York with the intent of living his dream as a Hollywood actor.  His friend, played by Vince Vaughn, shows him what it’s like to be a swinger.

Swingers has appeared on many top lists, due to the excellent writing, directing and performances by Jon Favreau and Vince Vaughn. American Film Institute recognized them for laughs, as well as two quotes: “Vegas, Baby.” And “You’re so money, and you don’t even know it.”

Swingers begins with Mike who recently moved to Los Angeles to start his career as a Hollywood actor. When he is having personal problems, his friend Trent shows up and brings him to Las Vegas for a night of fun. Unfortunately, he fails to have a one-night-stand due to obsession with his ex-girlfriend and returns to L.A. Here, his friends try to teach him how to pick up women, and other themes are prevalent throughout the movie, including friendship, failing careers, and the dating scene in Hollywood. He eventually meets Lorraine, played by Heather Graham, who helps him forget about his ex-girlfriend and allows him to move on with his life.

The Swing revival of the 1990s plays a big part in the film, although that is not what the premise is about. Characters of Swingers often go out to nightclubs and during that time, Hollywood’s nightlife involved swing music. Slang from the movie also became popular in modern society, including using “Money” as an adjective for quality, as well as the film’s most popular quote, “Vegas, baby!” The slang term “Wingman” also became a socially used word following this movie. Swingers opened in theaters to moderate success and remains highly rated by viewers and critics alike. 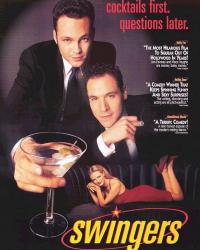