The Color of Money: Movie review

The Color of Money is a loose sequel to the 1961 film, The Hustler. Released in 1986, The Color of Money is about Eddie Felson (played by Paul Newman in both films) who is a pool hustler and hopes to make a comeback. At the end of The Hustler, he was banned from playing professionally, but he has new reasons to come back to the game in The Color of Money. The film stars Tom Cruise as an arrogant client and a romantic interest in Mary Elizabeth Manstrantonio.

Not only is this is a great sequel to the beloved Hustler, but Martin Scorcese directed the movie and does a predictably fantastic job. This come as no surprise since The Color of Money was nominated for 3 Golden Globes, 5 Academy Awards and endless other awards the year it came out.

The Color of Money film summary

The Color of Money stars Paul Newman as Eddie Felson, a previous pool hustler who is now in the liquor businesses. He misses the action and soon becomes a stakehorse for Vincent, played by Tom Cruise. Vincent is incredibly arrogant and traveling with his girlfriend Carmen (Mary Elizabeth Monstrantino). Eddie soon teaches both of them how to hustle, until they have a falling out and they part. After splitting up, Eddie remains on the road and starts hustling on his own, until he reaches the professional tournament of pool players. Naturally, he is up against Vincent, who he previously taught how to hustle a game of pool.

After winning this first match, Eddie finds out Vincent lost on purpose, and offered him $8,000 from the cut. Eddie then gives up the next match, offering the money back to him. In the end, the two make a promise to play a private and “real” pool game someday. It is agreed upon fans of the original Hustler movie that The Color of Money isn’t as good and there are few references to the original, but that on its own, The Color of Money offers a great story. 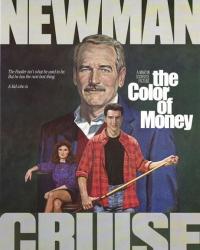