Never before in cinematic history has one character made laughing at a losing streak as fun as Bernie Lootz. No matter how bad his gambling problem, as a movie watcher you can’t help but pull for poor ole’ Bernie. That’s what makes his romance with the gorgeous Natalie all the more enriching. When he sets his sights on the waitress you can practically see the slot-jackpot bells going off in his head.

While Bernie’s storyline is the main attraction, the subplot revolving around “Old” Vegas vs. “New” Vegas is just as entertaining. Alec Baldwin’s portrayal of Shelly Kaplow will make old-schoolers feel nostalgic for the glory days of Vegas, while Ron Livingston’s Larry Sokolov embodies the booming money-making machine Vegas is today. Their feud will have you wondering who will persevere, but if there’s one thing to be sure of, no matter who fights, the House always wins.

Bernie Lootz (William H. Macy) is not a man you want sitting next to you at a Blackjack table. A man who is addicted to casino gaming, but is also one of the unluckiest losers in film history, Bernie couldn’t win a casino game if he had horseshoes tattooed on his face. After running up a serious 100,000 casino debt to notorious Shangri-La casino manager Shelly Kaplow (Alec Baldwin), Lootz is forced to work as “The Cooler”, someone who sits next to high rollers and hopefully change their good luck to bad luck. It’s the job Bernie is born to do, at least until his luck starts to change.

After meeting cocktail waitress Natalie Belisario (Maria Bello), Bernie starts to put the odds in his favor. With his debt almost paid off, the two lovebirds make plans to escape Vegas forever, but Shelly Kaplow isn’t one to just let him walk out on his debts, after all he’s “old Vegas”. Bernie senses his one way out is by relying on what used to be his biggest weakness: Lady Luck. In a Craps game for the ages, Bernie has a huge chip pile, but after two losing rolls decides to go for one more. Has Bernie’s luck run out, or is winning at a Craps table the least of his worries?

Does The Cooler quench the Casino thirst of movie buffs?

At its heart, The Cooler is a relatively simple love story set in a Vegas that few people know. It may seem hard to believe in this day of mega-casinos and French-Canadian singers, but Las Vegas was built to be a gaming haven for old school mobsters, big winners and big losers. In his portrayal of Bernie Lootz, William H. Macy has brought to life the perfect casino loser, and a man with such bad luck that he gives it to others. While Macy carries the movie, Alec Baldwin’s casino manager perfectly portrays “old school Vegas relic” in a way that only Baldwin can. 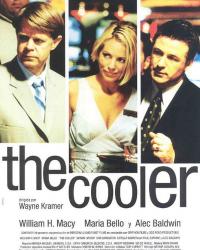