James Toback’s screenwriting debut came in 1974 with this drama loosely derived from the story sharing the same title written by Fyodor Dostoevsky in 1867.

Starring James Caan as a degenerate gambler (Axel Freed) and Paul Sorvino as his bookie Hips, this movie’s main focus is Freed’s decent into gambling addiction, and his subsequent plan to escape from it’s downside. Karl Reisz takes directing duties confidently and it shows judging by the overall reception after the movie was released.

The downward spiral on which Freed embarks is one that is easily recognized in film and can attract almost any audience and keep it enthused.

Axel Freed is an English Professor in New York when his gambling addiction begins to take over his life. Even though he has a beautiful woman named Billie on his side (played by Lauren Hutton), and a loving supporting family, he manages to alienate himself while racking up huge debts from basketball betting. To make matters even worse, he borrows $44,000 from his own shocked mother to repay his gambling debts.

Having run out of options on how to repay additional loses, after he racks up another huge debt with Hips, his only recourse is to convince a young basketball phenom to shave points in a game for him. The psychological torment that follows after he corrupts the innocent young man plagues him. He eventually gets beaten up, with the help of a scary man whom he sadistically confronts, fully expecting the scarring and violent outcome.

Aces for James Caan and Lauren Hutton on the silver screen?

Caan and Hutton are both top-class in this movie. The acting brings the average viewer from someone totally foreign to this lifestyle close enough so they can feel exactly what an impact gambling addiction can have and how scary that world is once you’re in it. Typical of many of Dostoevsky’s other written works, this is the path of one man to delve into his inner being and resolve the torrent of conflicting emotions within him. The human psyche is neatly explored in The Gambler and it is a standard story by which many others are copied. Keep your eyes posted for another remake starring Leo DiCaprio as Axel Freed. 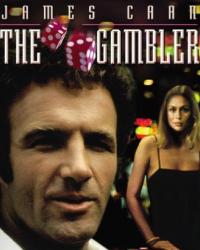