Reminding us once again that a remake can be a great film and do justice to the original, Director Neil Jordan (who wrote and directed The Crying Game, The End of the Affair, Michael Collins) has created an updated, sexed-up version of the 1950’s classic (and movie we reviewed here) Bob Le Flambeur.

To be sure, no matter how good the story, this movie would not have been as good without Nick Nolte. As well-past-his-prime gambler Bob Montagnet, Nolte truly keeps the audience guessing as to his true intentions. He may be trying to pull two heists, but no matter how successful he is, we truly get the feeling that his luck is set no matter what. Great supporting work by relative unknowns (at least to North American audiences) like Tcheky Karyo layer nicely with Nolte’s outstanding solo work.

Bob Mantagnet (Nick Nolte) is an American career gambler and drug addict who is well known to the French authorities of Nice where he currently lives. Bob’s friend, Roger, knows Bob better than anyone, but unfortunately Roger also happens to be a cop. When Bob rescues prostitute Anne (Nutsa Kukhianidze) from her pimp, he hopes that his long-running losing streak has been put to an end. When Bob comes up with a plan to steal rare paintings from a Monte Carlo casino, will Anne prove to be his inspiration or his downfall?

Any good heist needs a good team, and through his dealings Bob know just the people to help.With his assembled team of thieves, including Anne, former drug dealer Said, tech wiz Vladimir and identical twins Albert and Bertram, Bob looks well poised to put his plan into effect, but with Roger hot on his heels, is he destined for a big win or another crushing loss? Bob and his team have tried to hedge their bets by creating two separate ruses, but executing two plots at the same time, in a city as dynamic as Monte Carlo could prove to be too much, even for the Good Thief.

Is the Good Thief a decent remake or will you feel robbed?

Even if you haven’t seen Bob Le Flambeur, The Good Thief will entertain as a straight-forward heist flick set. As Bob plans out his plot we are truly left wondering what will happen next. The twists and turns are there, but thanks to great directing nothing is ever given away. Approaching the final casino scene in beautiful Monte Carlo, in true Film Noir fashion we are left to wonder why characters behave the way they do and whether it is possible to be a “Good Thief”. This movie accomplishes so much compared to “big money” gambling movies and it does so with class. 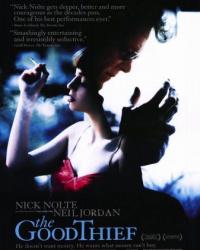