Filmed as a “mockumentary” and released in 2007, The Grand involves a variety of actors seemingly playing in a real-life poker tournament with much of the comedy being improvised. Written and directed by Zak Penn, The Grand features actors and poker players Chris Parnell, Cheryl Hines, Dennis Farina, David Cross, and Woody Harrelson.  It was first shown at Tribeca Film Festival to decent reviews.

One of the best parts of The Grand is the comedic timing and improvisation styles of Chris Parnell. A Saturday Night Live alum, Chris Parnell does an amazing job as a lonely poker player with a mental disorder, delivering his lines flawlessly. The other actors in the film also do a great job at this unique movie style, as they are all trying to win the $10 million poker tournament. While it got mixed reviews by critics, fans of poker and particularly of the actors in the film, enjoyed it.

Because this is a “mockumentary” made to look like a real poker game and documentary, all actors are playing another character, though it appears like a true story and real tournament. This includes Woody Harrelson, who leads the movie as Jack Faro, trying to win the tournament to save his grandfather’s hotel casino. From the beginning of the movie, it is clear that between him and other opponents, all bets are off.

Jack Faro is a recovering drug addict who moved into his rehab center and has been married 75 times. His late grandfather, Lucky Faro (Barry Corbin) passed down his hotel, The Rabbit’s Foot, but Jack has run it to the ground. They sponsor an annual poker tournament called The Grand, which Jack now needs to play to earn enough money for turning his hotel around, so a casino mogul doesn’t take it from him. A big part of this movie is about a poker game he wants to win, run by a hotel he actually owns.

The Grand debuted at the prestigious Tribeca Film Festival

Aside from Jack, everyone in the tournament won seats from an online poker tournament. Each of these characters bring their own personality, flaws and comedy to the movie, including a set of twins who have to compete against each other, a math genius, and The German, who sacrifices animals to win his games. By the end of The Grand, you’re hoping less for the winner of the game, and more for Jack to find resolution and maybe even wife #76. The Grand had a limited release, due to its satire and being a documentary-style film. It originally debuted at the Tribeca Film Festival, a prestigious film festival, and went on to limited theatres in the U.S. 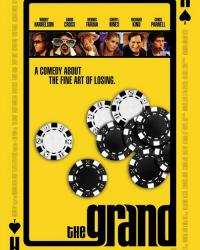