Have you ever woken up in the morning after a night of drinking and thought “Wow, what did I do last night?” Well, The Hangover takes that question to an entirely new level. At its heart, it’s a movie about finding something that’s lost, but in this case it’s a person who’s lost, and he’s getting married in less than 48 hours. One of the few movies about Las Vegas to actually get off of “The Strip”, The Hangover definitely gives a different side of Vegas than you’ve ever seen before.

While a few of the cast members of The Hangover are fairly recognizable, this movie catapulted them to household names. Bradley Cooper brings on the charm, Ed Helms freaks out about as good as anyone on film and Zach Galifianakis is cinema’s lovable loser for the Internet generation thanks to his clueless portrayal of Alan. While the cast carries the film, the very surprising twists and turns – and a naked guy in a trunk – make The Hangover one of our favorite films of the past decade.

When best friends Doug (Justin Bartha), Phil (Bradley Cooper) and Stu (Ed Helms) decide to celebrate Doug’s bachelor party, only one location comes to mind – Vegas, baby Vegas. Forced to bring along Doug’s soon-to-be brother-in-law Alan (Zach Galifianakis, in a career-making role) the “Wolf Pack” checks into Caesars Palace and has a night to remember. At least, it was a night they wish they could remember. Upon waking up the next morning with splitting hangovers, their hotel room is in complete shambles, Doug is gone and that’s not the only surprise.

As Phil, Stu and Alan begin their search for Doug, they’ll encounter angry cops, strippers, criminals, a tiger, Mike Tyson and for some reason a baby they find in the closet. The three hung-over friends hope to find clues on Doug’s whereabouts by piecing together the previous night, so they can get him home before his wedding. But can they find their friend while avoiding one seriously angry itsy-bitsy gangster who accuses them of stealing hundreds of thousands in casino chips? Together they’ll figure out a plan to set everything straight, all while dealing with one heck of hangover.

Is The Hangover worth remembering or should you just sleep it off?

Every decade or so a movie comes out that men flock to like moths to a flame: in the 90’s it was Swingers, in the 2000’s it’s The Hangover. Spawning a litany of memes and catchphrases, The Hangover is one of those movies that will be required viewing for all guys planning bachelor parties for the next hundred years or more. Pitch-perfect casting and the exposing of the bad side of “What Happens in Vegas, Stays in Vegas” lead to some of the craziest scenes in comedic film history. Even on the second and third viewings, The Hangover still has tremendous “must watch” power. 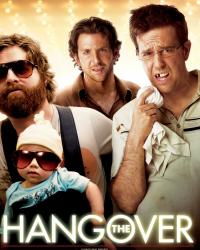