The Music of Chance: Movie Review

1993’s The Music of Chance has been overlooked for far too long, perhaps because of the major blockbusters that came out in theatres in the same year. After all, who wants to watch a beautifully told cautionary tale when Arnold is blasting away futuristic robots? Well we’re here to tell you that if you should take a chance on The Music of Chance, you’ll be glad you did. A movie about gambling that really is about chance and what it means to be a man, it’s time to watch this gem.

Like most great tragedies, The Music of Chance starts out on a light note, focusing on one character. When you revolve your movie around a protagonist, you better make sure you have the right actor for the role and boy does The Music of Chance ever have that in Mandy Patankin. With James Spader as his sidekick and main driving motivation, Patankin is given ample screen time to shine. As the story unfolds and the characters meet their fates, it’s a pleasure to see great actors ply their trade.

The Music of Chance film summary

Based upon the Paul Auster 1990 novel of the same name, 1993’s The Music of Chance tells the story of what can happen when you bet big and the cards don’t play out right. Mandy Patankin (The Princess Bride, Homeland) plays Jim Nashe, a man who has just come into a large inheritance. Newly divorced, Jim takes to the road to see America and along the way picks-up Jack Pozzi (James Spader) a hitch-hiker who will impact Jim’s life in a way no one could have foreseen. Once they begin to discuss Jack’s turn of fortune, nothing will ever be the same.

Jack tells Jim about how he recently lost $10,000 to two millionaires, simply by a stroke of bad luck or the “music of chance” and the two decide a rematch is the only way to make things even. The two millionaires, Bill Flower (Charles Durning) and Willy Stone (Joel Grey) once again come up lucky in the rematch. In a final attempt to beat the odds, Jim puts up his car as the ante for one last bet. Once again, Bill and Willy are the victors. Facing a huge debt, Jim and Jack are forced to do manual labor to work it off, resulting in hardship and ultimately, death. But for who?

What are the Chances You’ll Enjoy The Music of Chance?

Translating a novel to film can sometimes not work out as planned, however in the case of 1993’s The Music of Chance, documentary filmmaker Philip Haas pulls off an impressive feat, thanks in large part to a veteran acting cast, including the always-solid Mandy Patankin. At once a tale of how the desire for freedom can lead to servitude, The Music of Chance will appeal to gaming fans who realize how much can truly ride on “Lady Luck”. The Music of Chance raises questions of how much we are really in control of our own lives, and how fortunes can turn with just one decision. 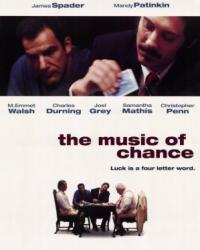