The Sting is a 1973 American film set in 1936 that features a plot involving two scam artists attempting to con a mob boss. The film has an incredible cast, including Robert Redford (Hooker), Paul Newman (Gondorff), Robert Shaw (Lonnegan), Charles Durning, Ray Walston and Eileen Brennan. The Sting features plenty of action, thrills and adventure involving crooked cops, con men, and mob bosses in the city of Chicago. The Sting is a fabulous adaptation of David Maurer’s classic novel The Big Con: The Story of the Confidence Men.

At the 46th annual Academy Awards, the film was nominated for 10 Oscars, taking home seven of them. Of those seven victories, the film secured Oscars for Best Picture, Best Original Screenplay, and Best Director. This movie is incredibly entertaining and will keep you glued to the screen with all of the twists and turns thrown in between the various players of the con game.

Johnny Hooker is a drifter from Joliet, Illinois, who defrauds $11,000 from an unwitting victim. His friends, Luther Coleman and Joe Erie, aid him. With the big score, Luther decides to retire from the con game and tells Hooker to seek the aid of Henry Gondorff when it comes to ‘the big con’ in the city of Chicago. The first twist in the story occurs when viewers find out that the con victim was a rackets courier for crime boss Doyle Lonnegan. Joliet police lieutenant William Snyder is corrupt and asks for payment from Hooker – that’s not happening!

Henchmen of Lonnegan then murder Luther and Hooker hides from the gang in Chicago. Gondorff poses as a bookie named Shaw to enter Lonnegan’s high-stakes poker game, winning $15,000 from the gangster. Hooker is posing as Kelly, an employee of Shaw, to stay close to Lonnegan, but not give away his identity. Lonnegan becomes increasingly frustrated with his gang’s inability to find and kill Hooker, so he hires his best assassin to do the job. The assassin is Salino.

Newman and Redford Scored Big with this ‘Sting’

In the end, we find out that an undercover FBI agent named Polk, is actually Hickey, another con man involved in the scheme. Hooker and Gondorff are successful in their con and walk-away unscathed.With a star-studded cast that included Robert Redford and Paul Newman, The Sting enjoyed success at the box office and at several award ceremonies. Brilliantly produced, The Sting also hauled in Academy Awards for Best Writing and Best Costume Design. The cast blended together in perfect harmony and they captured the minds of millions the world over. There’s nary a minute of this film that isn’t enticing or exciting to the viewer. Be sure to rent The Sting for your next movie night, as this Poker action thriller never disappoints! 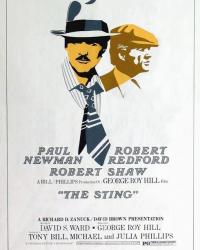