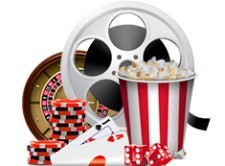 So you’re just back from Vegas, and you just didn’t get enough of Sin City into (or out of) your system. We know the feeling, and clearly, so do many a Hollywood producer and film studio. Casino movies capture the magic of Las Vegas casino folklore like no other  and allow the viewer to sample the decadence and danger, without any of the risk! While this might spoil the fun for many a risk-taker, it’s a golden ticket for many more who’d prefer to experience the chaos from their easy chairs. Here’s our list of our Top 15 casino movie reviews.

Without a doubt, the following are our pick of the top 10 casino films or casino related films ever to hit the silver screen. So make yourself comfortable at home, make yourself some popcorn, and enjoy!

Kevin Spacey delivers a hilarious performance as Jack Abramoff in this “based on a true story” film about a Washington insider who uses his influence to get tremendously wealthy, only to watch it all go down in flames.

When three friends wake up after a Las Vegas Bachelor Party and can’t find the groom, it starts a hilarious search filled with strippers, stolen loot and even a tiger! Can the friends get him back in time?

Based the true story of six MIT students who use their card counting skills to scam Vegas casinos out of millions, 21  is a young, fresh take on the Vegas heist oeuvre, but one that surely won’t disappoint!

When one of their own becomes the victim of a casino magnate’s scam, Danny Ocean (George Clooney) re-assembles the team for one last job against Willy Bank (Al Pacino). Unlike the times before however, this time it’s personal!

Jake Green (Jason Statham) is released from prison and puts his newfound gambling knowledge to use in seeking revenge against the man who set him up. But after a hit is put out on him, will Green survive?

The Boys are back! After pulling off the greatest heist in Vegas history, Danny Ocean (George Clooney) and crew need to repay casino owner Terry Benedict (Andy Garcia) and also avoid a criminal mastermind before time runs out.

The true story of a Canadian banker who embezzles millions to fuel his gambling addiction via weekly trips to Atlantic City, where he’s treated like royalty. It all unravels when his bookie is investigated by the police.

William H. Macy gives a powerhouse performance as Bernie Lotz, a man whose legendarily bad luck and casino debt leads him to be hired as a “Cooler”, someone who sits next to winning players and makes them lose.

In this modern-day remake of Bob le Flambeur, Nick Nolte playsBob, an old con man down on his luck, looking to pull off one last con job in Monte Carlo – but the police are hot on his heels.

Featuring an A-list cast including Brad Pitt, George Clooney, Matt Damon, and more, this remake of the Rat Pack classic revolves around a team of con men looking to pull off the biggest heist Vegas has ever seen.

Based on Hunter S. Thompson’s famous novel of the same name, this film is a psychedelic trip in gonzo journalism. When Raoul Duke (Johnny Depp) takes a suitcase full of drugs to Vegas, what could possibly go wrong?

This British neo-noir film from 1999 introduces Clive Owen as a writer-cum-croupier who gets involved with romance, cheating and eventually conspiring in a heist. He then finds this lifestyle is hard to get away from.

When six friends take their friend on a Vegas Bachelor Party, things take a turn for the worse when a stripper is accidently killed. As they cover their tracks some very, very bad things start to take place.

The Griswalds are back on vacation! America’s favorite family is back, led by the goofy Clark (Chevy Chase) as he takes his family on vacation to Sin City. Plenty will go wrong along the way – bet on it!

After losing everything he cares about because of his drinking, Ben Sanderson (Nicholas Cage) moves to Las Vegas with aims of drinking himself to death, only to have everything change when he meets a beautiful waitress (Elizabeth Shue).

Martin Scorcese’s masterpiece about greed, corruption and power in early Vegas tells the story of two wiseguy friends (Robert DeNiro and Joe Pesci) who turn against each other when a beautiful woman (Sharon Stone) gets in the way.

After his father’s death, Charlie Babbitt (Tom Cruise) discovers that his inheritance has been given to his brother, Raymond (Dustin Hoffman), an Autistic patient in a hospital. As the two drive across country, both their lives change forever.

To receive a $10 million inheritance, Monty (Rodney Dangerfield) must give up drugs, drinking and gambling for a whole year. Against all odds, he does his very best but is still in for a big shock in the end.

The classic that spawned a genre, this film about an aging con man looking to pull off one more big casino heist is a can’t miss. Stylish and addictive, Bob le Flambeur is Film Noir at its best!