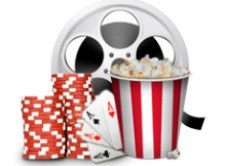 Alright, our ability to consume everything and anything poker in 2D is insatiable, so we were especially excited when we learned we’d be pulling a list of top poker movies together for our readers. Some of these poker movie reviews cover films that are absolute classics and known by all, whether you’re a poker fanatic or not. Other films on this list, however, we’re certain will come as a surprise to even the most ardent poker cinema aficionados. Without further ado (get your torrent clients ready), here’s our list of our Top 15 favorite poker films.

Here it is, our definitive list of the top 10 poker films of all time. We’re fairly certain there will be at least a few in here which you’re likely to have never even heard of, let alone seen, so grab a seat and enjoy!

Bret is a hot shot poker player who teams up with legendary Tommy Vinson (Burt Reynolds) with hopes of taking Vegas by storm. Together they enter the World Series of Poker, but who will come out on top?

Set in 1950’s Cuba, Jack Weil (Robert Redford) is on his way to set up a high-stakes poker game, but becomes mixed-up with the Castro revolution when he meets the beautiful Roberta. Will he choose love or poker?

Huck Cheever (Eric Bana) dreams of playing in the World Series of Poker Tour and he’ll do whatever needs to be done to get in – including stealing from the woman he loves. Can he save himself and win?

007 is back! Daniel Craig’s first movie as James Bond features 007 hot on the heels of criminal mastermind Le Chiffre (Mads Mikkelsen). As they sit down to a poker game in Montenegro, the stakes couldn’t be higher!

“Ace” Anderson (Dominique Swain) is a young medical student who teams with her classmates to form an unstoppable poker playing team in Vegas. But just like in surgery, as the stakes rise, poker can be the ultimate gamble.

This overlooked 2003 poker thriller dives deep into the world of L.A.’s poker hustlers. As a team of players prepare to pull off the biggest con of their life, are they sure they’re not the ones being played?

In this ensemble romper, Casino king Donald Sinclair (John Cleese) has hidden six gold coins that will lead teams to a $2,000,000 prize. As the teams race to find the coins, Sinclair’s clients bet on who will win.

Tracking down her absentee father, Lidda Doyles (Kirsten Dunst) finds him in high-stakes poker halls, with one big score to settle. With her new love also dreaming of striking it rich in Vegas, how can Lidda escape unscathed?

In order to help his friend who is in trouble, Mike McDermott (Matt Damon) will re-emerge himself into the poker lifestyle he hoped to stay out of forever, and seek revenge on his nemesis Teddy KGB (John Malkovich).

The violent world of London gangsters all fighting to get rich quick is portrayed in Guy Ritchie’s feature film debut, and one of his very best. One character is a card sharp involved in a shady game of three card poker.

Mel Gibson, Jodie Foster and James Garner headline this blockbuster about a sly poker con-man (Gibson) who needs to raise money for a poker game, but may have just found his match in the temptress Annabelle Bransford (Foster).

When two men decide to seek revenge in a high stakes poker game, they truly find out that in the game of poker it’s winner takes all. Will they beat the House, or be forced to build it?

As The Lieutenant (Harvey Keitel, in a powerhouse role) investigates a brutal crime, he looks to overcome his own demons including drugs, alcohol and a serious gambling addiction. Finding the criminal may just be his road to forgiveness.

When a beautiful psychiatrist tries to help a client repay a loan to a mysterious bar owner, she becomes deeply involved in the underworld of backroom poker games. Is anything as it seems in the House of Games?

Burt Lancaster and Susan Sarandon star in a film about a small time gangster (Lancaster) who becomes involved with a young croupier (Sarandon). When her husband is killed by mobsters, he’ll need to try to save her too.

Paul Newman and Robert Redford team up in this classic about a con man (Redford) who teams up with a legend (Newman) in order to seek revenge against a mob boss and pull off the ultimate con job.

After a cheater in a high stakes poker game is lynched, other players begin to meet their demise. Dean Martin is the only man who can get to the bottom of the mystery, but what will he find?

Known as the “Wildest Poker game in the West”, A Big Hand for the Little Lady is a fish out of water tale, but just like any great poker game it features with one hell of a kicker!

Barney Lincoln (Warren Beatty) devises a plot to place telltale marks on the printing cards that most casinos use. As he wins big and plans to take on a foe, however, Scotland Yard is hot on his heels.

Steve McQueen is ‘The Kid’ who embarks on a mission to prove himself as the best poker player around in this 1965 American drama typing here. The plot develops into a game that ends with a crazy final hand.

The story of a Greek immigrant who takes the underground poker world by storm in a meteoric rise to power, this classic mobster film has you “all in” with two of the best onscreen wise-guys of all time!