With a title like Very Bad Things, and a setting like Las Vegas, you know this isn’t going to be about penny slot players who go to buffets. Director Peter Berg (Battleship, Friday Night Lights) brought this twisted tale of bachelor parties gone wrong to theatres in 1998, and it’s still as funny today as it was 15 years ago. What starts out innocently enough eventually ends with a domestic nightmare, at least for Cameron Diaz’s Laura. All she wanted was a nice wedding day, is that too much to ask?

Where Very Bad Things really ups the ante is in its escalation of mistakes. Characters make decisions faster than a computer, but they’re rarely well thought out. A great cast, including Jeremy Piven, Cameron Diaz at her absolute hottest and of course, Christian Slater and Jon Favreau to round out the cast of this hilarious film.

As his wedding to Laura (Cameron Diaz) approaches, Kyle Fisher (Jon Favreau) finds himself counting the days to his Vegas Bachelor Party. Fisher is joined by his best friends, including Boyd (Christian Slater), Adam (Daniel Stern) and his brother Michael (Jeremy Piven). When Michael takes the stripper the guys have just hired into the bathroom for a little “extra”, it looks like it’ll be a Bachelor Party to remember. But unfortunately, when the stripper is accidently killed, the guys will be left to wonder if they’ll ever be able to forget what they get themselves into.

To make matters worse, the guys kill the security guard who finds the stripper. Disposing of the two bodies in the desert, things start to unravel for the former friends. Michael kills Adam in an airport by accident, Boyd confronts Adam’s wife Lois (Jeanne Tripplehorn) who heard about what really happened in Vegas, and Michael himself. As if that’s not bad enough, Laura is a Bridezilla who cares nothing about his friends, as long as her special day remains perfect. As the dominoes continue to fall, we come to see what happens when really good people do some Very Bad Things.

In some ways, Very Bad Things is a lot like the Hangover, if the Hangover were about 100% darker. The relationship of the Bachelor Party guys is dynamic to watch, with Daniel Stern, Jeremy Piven, Jon Favreau and Christian Slater excelling at their attempt to balance the morality and repercussions of their actions with the whole fact that there’s a wedding to be had. As the entire crew gets gradually deeper into the quicksand, it may make you rethink going to that Vegas weekend, but it won’t make you regret watching this entertaining flick. 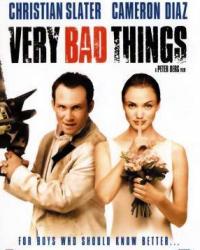