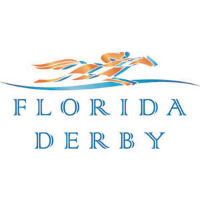 The Florida Derby is the most productive and important Kentucky Derby prep race of recent times. The $1 million Grade 1 for three-year-olds at Gulfstream Park is often the last stop on the way to the Kentucky Derby at Churchill Downs, and regularly features the best sophomores on the East Coast. With big fields, top-class horses, and large wagering pools, the Florida Derby is a can’t-miss horse racing event of the season.

The odds to win the Florida Derby are now available. The odds are likely to change as we approach the event itself, so be sure to check back with this page. The odds were last updated on March 25, 2021:

As soon as the odds are available, you will be able to bet through one of the best online racebooks below.

The Florida Derby, a leading prep race for the Kentucky Derby and Triple Crown, was first run in 1952. It was originally run in mid-March (around March 15) so that horses would have one more prep race, either the first or second week of April), but has now moved to its spot on the calendar five weeks before the Kentucky Derby. It has proven a popular move, with four winners in the last seven years ultimately crossing the finish line first in Kentucky.

Empire Maker in 2003 boasts the largest winning margin, scoring by 9 3/4 lengths. He went on to run second in the Kentucky Derby and upset Funny Cide in his bid to win the Triple Crown that year.

Constitution went on to sire Tiz the Law, winner of the 2020 Florida Derby. Tiz the Law won the 2020 Belmont Stakes in June and is the favorite for the 2020 Kentucky Derby, to be run September 5.

The Florida Derby is also a showcase event for genuinely great horses. Thunder Gulch won the 1995 Florida Derby, followed by the Kentucky Derby, Belmont Stakes, and Travers Stakes. He went on to sire 2001 champion racehorse Point Given.

1994 Florida Derby winner Holy Bull is in the Racing Hall of Fame. He won 13 of 16 starts, won the Met Mile (G1) as a three-year-old, and then won both the Travers and the Woodward against older horses. He was named the 1994 Horse of the Year.

Possibly the most famous Florida Derby winner is Barbaro. He was unbeaten going into the Florida Derby, which he won by just a half-length before taking the Kentucky Derby by 6 1/2 lengths despite stumbling at the start. Barbaro was injured in the Preakness and famously lost his life half a year later after battling with laminitis.

Spectacular Bid won the 1979 Florida Derby en route to trying to become the third consecutive Triple Crown winner after Seattle Slew (1977) and Affirmed (1978). Spectacular Bid won the Kentucky Derby and Preakness Stakes, but infamously stepped on a safety pin and lost the Belmont. He came back to have a stellar four-year-old campaign and is considered one of the greatest horses of all time.

Snow Chief, who won the 1986 Florida Derby, is a rare shipper from California to take the race (Nyquist did it in 2015 as well). Snow Chief had a brilliant career as well, winning the Hollywood Futurity, California Breeders Champions Stakes, El Camino Real Derby, Florida Derby, and Santa Anita Derby in succession. He is the only horse to win both the Florida Derby and Santa Anita Derby in history. He also won the Preakness Stakes and won more graded stakes as an older horse.

The 2021 Florida Derby takes place on March 27. Florida Derby entries will be drawn on March 24. Expect some of the best two-year-olds from 2020 to make the field, especially from the barns of Todd Pletcher, Brad Cox, Chad Brown, and Mark Casse. Many New York and Kentucky-based trainers spend the winter in Florida, pointing their best three-year-olds to the Florida Derby.

The average field size in the last 10 Florida Derbies is 10.3 runners. That is more than the average for the Wood Memorial or Santa Anita Derby, two other major Kentucky Derby preps.

The winning payouts of the last 15 Florida Derby winners, as well as running position, are as follows:

The Florida Derby is fairly formful, with favorites and horses with low odds running well most years. Only three horses in the last 15 years broke double-digit payouts, and only one – Ice Box in 2010 – paid more than $18 on a win ticket.

If you’re wondering how to bet on the Florida Derby, only two closers have won in recent history. Both of those hailed from the barn of Nick Zito. The race is more often won by a horse with speed or one sitting just off the pace.

Florida Derby to the Kentucky Derby

In addition, Scat Daddy won the 2007 Florida Derby and went on to be a top sire. His best offspring was the 2018 Triple Crown winner Justify. Another brilliant sire that won the Florida Derby was Unbridled’s Song, who would be favored in the 1996 Kentucky Derby.

10 winners of the Florida Derby went on to take the Preakness Stakes, while another six won the Belmont Stakes, including 2020 Florida Derby hero Tiz the Law.

A handful of horses ran in the Florida Derby and ran well but didn’t win, then went on to take the Kentucky Derby. Those horses are Foolish Pleasure, Cannonade, Go for Gin, Strike the Gold, and Pleasant Colony. The Florida Derby has always been a fantastic barometer of Triple Crown success.

The Florida Derby has one of the biggest betting pools of the year. Handle typically tops $45 million for the day, with a record of $53 million in 2020.