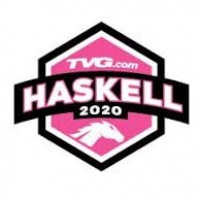 Betting the Haskell Invitational is a key part of the summer horse racing scene, as the $1 million race draws some of the best three-year-olds in the country. The 2020 Haskell Invitational at Monmouth Park in New Jersey includes horses like Authentic, Dr Post, Sonneman, and Ancient Warrior.

The Haskell horse race was first run in 1968 and has since grown to be one of the most important races on the annual calendar. The Monmouth Park fixture has a long history of being the summer race to point to, along with the Travers at Saratoga. The horse who won the Haskell was often a horse who had a shot at being Champion Three Year Old at the end of the year.

Originally the Amory L. Haskell Handicap, the race became an invitational for sophomores in 1981. The purse was increased to $1 million for the first time in 1997 and is typically at that price save for when War Emblem ran in 2002 and it was increased to $1.5 million, and the $1.75 million that was used to draw American Pharoah in 2015. Monmouth Park sometimes offers a bonus of $250,000 to every Triple Crown race winner that runs in their premier race.

Betting on horse racing such as the Haskell is easier when you have a grasp on the Haskell field and Haskell postpositions. The official post positions will be drawn on July 15, 2020.

Authentic is the biggest star in the race, having already won the sham Stakes (G3) and San Felipe Stakes (G2) at Santa Anita Park before finishing second in the Santa Anita Derby (G1). He has won three of his four starts and has beaten highly touted horses such as Honor A. P. and Azul Coast.

Dr Post is a son of Quality Road coming out of a second-place effort in the Belmont Stakes (G1). The Todd Pletcher-trainee finished 3 3/4 lengths behind Belmont winner Tiz the Law but has improved every race and that was only his fourth-lifetime start. He was a stakes winner in the Unbridled Stakes at Gulfstream Park in April.

Sonneman, by Curlin, is out of Zardana, who once beat Haskell Invitational winner Rachel Alexandra at the Fair Grounds. Sonneman won his maiden in 2019 at Belmont Park, then won an allowance at Gulfstream Park in April. Steve Asmussen trains the stakes-placed colt, who ran second in the Easy Goer on June 25.

Ancient Warrior has won once in five starts. The son of Constitution broke his maiden at Del Mar in the fall and has most recently run third in allowances at Oaklawn Park and Churchill Downs. Jerry Hollendorfer trains.

In 2020, the Haskell is being run as prep on the Road to the Kentucky Derby. It offers 100 points to the winner, 40 points to second place, 20 for third, and 10 for fifth. It is the second to last 100 point race on the newly revamped schedule following the postponement of the now September 5 Kentucky Derby. The other is the Travers Stakes at Saratoga on August 8. After the Haskell, there will only be four Kentucky Derby prep races worth points left on the calendar.

Authentic is the most likely Haskell winner. The son of Into Mischief is trained by Bob Baffert, who has won this race eight times since 2001. Among his notable winners are Triple Crown winner American Pharoah, Kentucky Derby and Preakness Stakes winner War Emblem, Preakness winner Lookin at Lucky, Preakness, and Belmont Stakes winner Point Given, and Breeders’ Cup Classic winner Bayern. Baffert knows how to train a horse for the 1 1/8 mile distance on dirt, and this race has been circled for Authentic since early June. Authentic will be the favorite and is likely to win.

The Haskell usually goes to favorites, and an Authentic win would continue this trend. The race favors his running style, and his class is above the others in this race. Only Dr Post, second in the Belmont Stakes last out, is similar in class and could pose a danger especially if Authentic is going the wrong way following his June 6 loss at Santa Anita.

Your Haskell Invitational Expert Picks are:

In 2019, the entire Haskell Invitational card was delayed due to extreme heat, and run hours later than scheduled. By the time it was over, Maximum Security, winner of the 2019 Kentucky Derby before he was disqualified for interference, proved the winner once again. He had also won the Florida Derby and went on to take the Cigar Mile.

The Haskell Invitational is often won by racing’s stars, with 2016 Preakness Stakes winner Exaggerator winning the Haskell that year. Triple Crown winner American Pharoah won in 2015 in a very popular victory with a record-breaking crowd on hand. Bayern won the race in 2014 before winning the Breeders’ Cup Classic. When Verrazano won in 2013, it was by a Haskell record margin of 9 3/4 lengths.

Filly Rachel Alexandra won the 2009 Haskell over a field of top colts on her way to being Horse of the Year. She wasn’t the first filly or Horse of the Year to win it; in 1995, Serena’s Song took on the colts to win the Haskell, and in 1994 Holy Bull won it on his way to Horse of the Year. 2008 Kentucky Derby and Preakness winner Big Brown, who lost the Triple Crown at Belmont Park, rebounded to win that year’s Haskell.

The rest of the best Haskell winners include Skip Away, Touch Gold, Coronado’s Quest, Point Given, Lookin at Lucky, Forty Niner, and Bet Twice.

Five times in the last 10 years, the favorite has won the Haskell six times, with the second choice winning another two times. The biggest Haskell payout in 10 years was Girvin in 2017 at 9 – 1, paying $20.40 to win.

There are five undercard stakes on Haskell Invitational Day.

The $300,000 United Nations Stakes (G1) is over 1 3/8 miles on the turf. The race is expected to bring turf star Arklow just a week after he won the Eklhorn at Keeneland. The United Nations has been won by the likes of Round Table, Sandpit, English Channel, Lure, Sky Classic, Manila, Dr. Fager, Better Talk Now, and the popular local runner Presious Passion.

The $300,000 Monmouth Cup (G3) is for older horses. It could have a truly top field in 2020, with names like Math Wizard, Plus Que Parfait, and Core Beliefs probable. If Joevia runs, he is the pick based on surface preference.

The $250,000 Molly Pitcher (G3) is 1 1/16 miles for older fillies and mares on the dirt. Dual Grade 1 winner She’s a Julie highlights the field, that could feature the return of Positive Spirit, last in the 2019 Kentucky Oaks last out. Past winners include Horse of the Year and Hall of Famer Lady’s Secret. Trainers Todd Pletcher and Shug McGaughey have both won the race five times each. Hystericalady won it twice, in 2007 and 2008.

The $150,000 WinStar Matchmaker Stakes (G3) is for three-year-olds and up, fillies and mares, on the grass over 1 1/8 miles. The race could include multiple Canadian champion Starship Jubilee, as well as Todd Pletcher runner Valiance.

The action gets started with the $75,000 Wolf Hill Stakes for sprinters on the grass.

The 2020 Haskell Invitational will be held on July 18 at Monmouth Park.