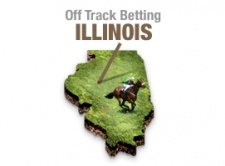 Though the heyday of horse racing in Illinois has passed, there is still a large appetite for the OTB in Illinois is home to some of the most historic racetracks in the country. Horse racing has been part of the landscape of the Chicago area since the 1830s and with several high profile tracks throughout the state, horse racing continues to be part of the local culture. Here we recommend the best places to place OTB bets in Illinois.

Online racebooks are a convenient and secure way to make sure you don’t miss a minute of exciting horse racing action. With an online racebook, you can get the most out of your wagering investment with competitive bonuses, rebates and promotions and you can shop around to find the racebook that is the best fit for your style.

Arlington International Racecourse is the premier racetrack in Illinois and was established in 1927. Known for the prestigious Arlington Million, a Grade 1 turf event held in the summer, the track hosts numerous graded stakes races and routinely attracts some of the best turf horses from around the world. The Arlington Million has the distinction of being the first million dollar race for Thoroughbreds in history. In 1985, a fire devastated the facility but the track rallied and fully reopened four years later.

Hawthorne Race Course is located close to downtown Chicago and opened in 1891. The track was purchased by Thomas Carey in 1909 and has remained in the Carey family ever since. Hawthorne was the home for Arlington Park’s major races while the track recovered and was rebuilding from the fire in 1985. The biggest race at Hawthorne Park is the Illinois Derby, a graded stakes race for three-year-olds.

Since 1981, the Arlington Million has been one of the most prestigious races in the country. The race made history out of the gate with a lofty $1 million purse which was, at the time, revolutionary. Since then, the race has developed into a premier Grade 1 event and part of the Breeders’ Cup Challenge series which means that the winner earns an automatic spot in the starting gate for the Breeders’ Cup Turf (G1). Some of the top horses in history, including John Henry and Gio Ponti, have won that race.

Off Track Betting in Illinois

Commissioned in 1933, the Illinois Racing Board has watched over the horse racing and betting scene, upholding the laws of the Illinois Horse Racing Act of 1975. More than 30 off track betting facilities operate within the state, giving fans a chance to bet on races from around the world.