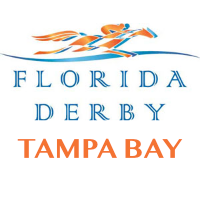 We will publish the current Tampa Bay Derby Odds as soon as we have them. See below the top sportsbooks where you can wager online and choose the best one for you:

The Tampa Bay Derby is a race that often gives very high payouts to its bettors. The winning payout for a $2 ticket has been $30 or more four times since 2007, and has been over $89 twice! King Guillermo is the highest-priced winner in history at $100.40 just this year.

There have also been only three winning favorites in the Tampa Bay Derby since 2007. Verrazano, who was favored in 2013 when he won, went on to be a good sire; his Vanzzy won the 2020 Jersey Derby.

Just one horse has won the Tampa Bay Derby and gone on to win the Kentucky Derby as well. That was Street Sense, victorious in 2007 by a nose after a thrilling stretch duel with Grade 1 winner Any Given Saturday. Despite winning the Breeders’ Cup Juvenile, Street Sense was not favored over Any Given Saturday, who was coming off a local win in the Sam F. Davis Stakes, the prep for the Tampa Bay Derby.

Although third in the 2010 Tampa Bay Derby, Super Saver went on to win the Kentucky Derby. He became the second horse to exit the Florida race and win in Kentucky. He was trained by Todd Pletcher.

Trainer Todd Pletcher loves using the Tampa Bay Derby as a Kentucky Derby stepping stone. He has a record 5 wins since 2004, including four wins in the last seven years.

The race has been won by a whos-who of top trainers on the East Coast. Graham Motion, Mark Casse, Barclay Tagg, Carl Nafzger, and Tom Albertrani have all won it. Perhaps the most royally-bred winner in Tampa Bay Derby’s history was Tacitus in 2019. The son of Tapit and the Grade 1 winning, dual millionaire mare Close Hatches was trained by Bill Mott. He went on to be third in the Kentucky Derby, second in the Belmont and Travers Stakes, and finally won again in the 2020 Suburban Stakes (G1) at Belmont Park. He holds the Tampa Bay Derby speed record of 1:41.90.

The Tampa Bay Derby, which is run over 1 1/16 miles, did not receive Grade 3 status until 1984, then was upgraded to Grade 2 in 2011. In the interim, the race was downgraded to a listed event before horses like Street Sense brought it to prominence. The race is run at Tampa Bay Downs in Tampa, Florida, which has been open since 1926.

The Tampa Bay Derby was a Grade 3 race before it was downgraded, and had to earn back its Grade 3 status in 2011. That was when horses like Street Sense and Super Saver made the race famous. With its purse and placement on the calendar, the Tampa Bay Derby is now considered a premier Kentucky Derby prep race.

Tampa Bay Downs offers the best betting options for handicappers. The track offers win, place, and show wagering, as well as exacta, trifecta, superfecta, daily double, Pick 3, Pick 4 and Pick 5 betting. The track’s takeout rate is some of the lowest in North America. There is a new Ultimate Pick 6 wager with a minimum wager of 20 cents. The track has an average field size of 8 horses per race and offers plenty of turf racing which most bettors enjoy.