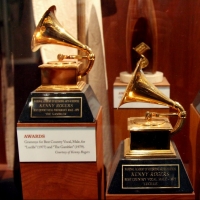 The Grammy Awards or simply the "Grammy's" is music's most prestigious awards show. It is also second-most popular of the four major annual American entertainment awards next to the Oscars for movies. The Grammys honour the best music artists of the previous 12 months. Unlike its film counterpart, the Grammy's is more competitive and less predictable. Upsets and surprise victories happen more frequently. This makes Grammy betting odds a rollercoaster.

Oscars betting odds or Academy Award odds are arguably the most popular form of Entertainment odds betting. The Oscars are one of the most-watched events and even before online betting became popular, aficionados and pundits have made predicting the winners a hobby.

Picking Oscars winners can be straightforward but profiting from betting them is something else entirely. Since a few other film awards take place before the Oscars, such as the Golden Globes and Screen Actors Guild (SAG) Awards, the picking of Oscars winners are influenced by the results here.

A nominee that wins the Golden Globes, SAG, and other awards will usually win the Oscars with a few exceptions. Popular categories such as Best Picture, Best Director, and the leading acting categories usually have a favorite.

Oscars Vegas odds are in line with the expected winners. But before betting on Oscars odds, learn the nuance of how the betting works.

Moneyline betting is the most common form of betting for Grammy odds. This is when you choose who wins the Grammy outright.

Like most popular awards shows, Grammy odds usually have a favorite while the rest are underdogs. On rarer occasions, you may see plus odds on everyone indicating there is no clear-cut favorite.

Prop bets are short for "propositions" and are sometimes known as exotic wagers. These are bets you make that can be answered by a "Yes" or "No" and are usually limited to two choices.

Here is an example of a prop bet: "Will Beyonce win both Album of the Year and Record of the Year"?

Prop bets tend to differ every time. You may even get the chance to open your own prop bet if you connect with your sportsbook.

Futures are a version of a prop bet or an outright but for an event that is still far away e.g. next year's Grammy awards. These markets are rare and even when opened, they can be taken off or have the odds updated.

Note that betting limits for prop bets and futures are lower than standard moneyline odds.

Totals are when you choose whether the actual result will go over or under the oddsmaker's total. It is traditionally used for the total score of a sports game, but with award shows like the Grammy's, it can be used for many things.

The most popular over/under odds are on how many awards a popular artist will win. As an example, if Eminem's award totals are lined at +1.5, it means you can bet whether Eminem will win one or fewer awards (under) or two or more (over).

To avoid a push (the result being exactly like the total, hence no winner), oddsmakers tend to line totals with decimals.

Normally, the totals are lined evenly, but one side can become the favorite if it receives more action from the public.

Album of the Year odds

This is the main event of Grammy betting and the most prestigious award in the event. There is usually a sizable favorite in this category and they win as expected although upsets can still happen.

Some of the most notable upsets include Beck's Morning Phase beating Beyonce's self-titled album in 2015 and The Arcade Fire's The Suburbs winning over Eminem's Recovery in 2011.

Record of the Year odds

There have been very few upsets but when they happen, they are quite shocking. Kings of Leon with Use Somebody raised eyebrows when they beat heavyweights Taylor Swift (You Belong With Me) and Beyonce (Halo) in 2010.

Song of the Year odds

Often confused with Record of the Year, Song of the Year odds relate to the composer of the song whereas Record is the performer. As many artists also wrote their own songs, they usually are the wins to accept this award.

Song of the Year is usually a predictable category and there are very few upsets unlike the Best New Artist.

If you're looking to score big on an underdog, this is your category. Best New Artist is a major category that yields upsets. Although favorites still win more, the upset ratio here is greater than the other three categories.

Examples of underdogs who prevailed here include Esperanza Spalding in 2011, Bon Iver in 2012, and Macklemore in 2014.

Best Rap Album odds are one of the prestigious genre-specific awards given how immense rap is as a music genre. Hence, this award may get its own odds, especially if the nominees are heavy-hitters in the industry.

There aren't too many upsets here although some people scored big if they bet Macklemore to shock everyone in 2014.

Like its rap counterpart, the Pop Vocal Album award is a popular genre-specific award thanks to its mainstream appeal. And just like pop music, this award lacks anything shocking or out-of-the-blue.

You'll have to go as far back as 2005 to spot an upset when Ray Charles won a posthumous award over the likes of Norah Jones and Joss Stone.

As of 2020, there are over 84 categories including the General field in the Grammy's. Not every award gets noticed or even presented, but here are a few more popular awards that may get their own odds:

Specific categories like these only occasionally get their own odds. It usually depends on the sportsbook or if there is any demand, such as when there are popular artists, for the lines to be opened.

Where to find Grammy betting

Find Grammy betting from whichever of the top online sportsbooks you'd like. Grammy betting is a part of the Entertainment betting category along with the Oscars, Wrestlemania, and other shows you can watch on television.

Check our partner table here to get a glimpse of the different sportsbooks. They all offer their own perks and assets, but they can all diverge when it comes to offering Grammy odds.

As Grammy betting is a niche category, do not expect all books to carry the odds. Some books may offer the odds early and are among the market leaders. Some may offer them later. The best way to find out is to scout the books.

By visiting the books, you can also review their signup offers and promotions (or read our unbiased reviews). It is unlikely that any book will offer much in the way of Grammy betting, but you never know.

By signing up for multiple books, you may also qualify for all of their signup bonuses. You also allow yourself more freedom when it comes to the betting odds. Always play the best betting odds.

Predicting Grammy awards is a fun hobby and you get to profit on top of it. But unlike sports, betting on entertainment and awards should mostly just stay as a hobby. The betting limits here are low and it is too predictable with odds on favorites not being worth the juice.

But don't let our cautionary tale stop you. Sign up for the best books and lay your bets free-willingly.