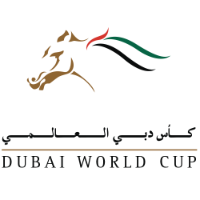 The Dubai World Cup is an extravagant carnival of horse racing that takes place the last Saturday in March at the Meydan Racecourse in Dubai. The Dubai World Cup itself is a $12 million race over 1 1/4 miles on the sandy dirt track and is a race that some of the greatest horses in the world have won.

The Dubai World Cup night of racing is worth $35 million across six Group 1 and three Group 2 races. It is one of the most important fixtures on the annual racing calendar. Keep reading to find out more about Dubai World Cup odds, wagers, field, and history.

The odds for the 2023 Dubai World Cup are now available. The odds are subject to change and will adjust as we approach the event, so be sure to check back with this page. This page was last updated on November 7, 2022:

The Dubai World Cup was first run in 1996 as the brainchild of Shiekh Mohammed bin Rashid Al Maktoum, who proposed a $4 million horse race that would draw the best runners in the world. When Cigar edged Soul of the Matter in a thrilling inaugural edition, the race became an instant classic and something that horsemen all over the world strive to win.

The Dubai World Cup’s history has grown with its legend. Singspiel won the second edition, then Kentucky Derby and Preakness Stakes winner Silver Charm took the third, edging Swain in an epic battle in 1998.

One of the most inspiring performances came from Dubai Millennium in 2000. The Godolphin homebred was originally named Yaazer but was renamed to Dubai Millennium as a nod towards the 2000 World Cup, which owner Sheikh Mohammed desperately wanted to win. Dubai Millennium cruised by six lengths and is considered an all-time great Thoroughbred. Two years later, Godolphin won again with Street Cry, who went on to be the sire of Zenyatta.

Americans have done very well in the Dubai World Cup, with the following winners: Cigar, Silver Charm, Captain Steve, Pleasantly Perfect, Roses in May, Invasor, Curlin, Well Armed, Animal Kingdom, California Chrome, and Arrogate all winning in 24 editions. Trainer Bob Baffert has trained the winner three times, with Silver Charm, Captain Steve, and Arrogate. That is a far cry from the record 9 wins by Saeed bin Suroor, who trains for Godolphin and won the race in 1999, 2000, 2002, 2003, 2006, 20014, 2015, 20018, and 2019.

Both California Chrome and Arrogate had wins that were particularly special. California Chrome’s saddle slipped, and jockey Victor Espinoza had to hold on the entire journey and hope that the Kentucky Derby and Preakness Stakes winner wouldn’t become irritated or dislodge him. California Chrome stayed focussed and won easily. Arrogate stumbled badly at the start, giving the field advantage, but still won and captured his fourth multi-million dollar race in eight months.

The only two-time winner of the Dubai World Cup is Thunder Snow, who won the race when the purse was $10 million and $12 million, putting his earnings at over $16.5 million.

The now-retired jockey Jerry Bailey, who has become a television analyst, has more wins than any rider with four (Cigar, Singspiel, Captain Steve, Street Cry).

The 2020 Dubai World Cup was canceled just days before the race due to the COVID-19 pandemic. All of the horses were already on the grounds and had to quarantine before they could leave the property without racing. The 2021 Dubai World Cup is slated for March 27.

Meydan Racecourse was built to replace the older Nad al Sheba, where the Dubai World Cup was originally run. Meydan is a sprawling venue with a huge, five-star trackside hotel and rooftop pool, horse racing museum, a 2400-meter turf course, and an 8.75-furlong inner dirt course. The stunning grandstand is just under a mile long, with seating for 80,000 people and covered parking for 8,600 cars. The stabling area also includes turf and all-weather training tracks.

Some of the world’s biggest music stars have performed at Meydan, including Elton John, Sia, Janet Jackson, and Jennifer Lopez

The horse racing season at Medyan Racecourse runs from October through early April.

The Dubai World Cup Carnival is a 10-meeting series of races, including a Super Saturday meeting three weeks before the World Cup with prep races for every division.

These races have produced some of the best finishes in racing. The Dubai Sheema Classic has been won by the likes of Japan’s Gentildonna, Ireland’s St Nicholas Abbey, Germany’s Cirrus des Aigles, and England’s Fantastic Light.

The Dubai Turf, formerly known as the Dubai Duty-Free, has been won by Japan’s Just a Way in record time (2014), as well as South African star Ipi Tombe, and in 2019 the mighty Japanese mare Almond Eye scored a popular win.

American runners shine in the Dubai Golden Shaheen, a dirt sprint for older horses. Mind Your Biscuits and Caller One both won it twice, with other American-based speedsters that won including Big Jag, Our New Recruit, Saratoga County, Proud Tower Too, Kelly’s Landing, Benny the Bull, Kinsale King, Secret Circle, and X Y Jet.

The Godolphin Mile went to California-bred Grey Memo in 2002 in a surprise win. Firebreak won it twice under Franke Dettori in 2003 and 2004. The Todd Pletcher-trained Coal Front was the 2019 winner under jockey Jose Ortiz.

The Al Quoz Sprint was won in 2019 by the brilliant English sprinter Blue Point. British-bred and Irish-trained Sole Power won a popular victory in 2015, and South African Shea Shea won it in 2013. J J The Jet Plane is the only two-time winner after taking the race in 2009 and 2011. This race was a late addition to the card, first being run in 2007.

To get an idea of who to pick in the Dubai World Cup, look at the results of the Breeders’ Cup from the previous year, as well as the Japan Cup in Tokyo, and the Hong Kong International Races in early December. Those races are typical previews of the kind of horses that show up for the Dubai World Cup and its undercard races each year.

The Godolphin operation does very well, as do Japanese and American-based runners. The Japanese contingent usually includes a host of horses, some of whom are well regarded and others are there for the experience. The American runners do better in the dirt races and very rarely do well in the turf races.

If not going to the Japanese or Godolphin runners, the turf races are often won by horses from Ireland, England, and even South Africa. Trainers such as Aidan O’Brien and Mike De Kock bring arsenals of strong runners to the event, which has recently seen an uptick in entrants from South Korea and Australia.

As for jockeys, William Buick, Frankie Dettori, Pat Dobbs, Christophe Soumillon, Connor Beasley, Richie Mullen are some of the top riders, especially locally. The Ortiz brothers Irad and Jose from New York and Mike Smith from California are the best options for shippers from overseas.

The Dubai World Cup card with its field and odds are drawn the Wednesday before the event, which will be March 27, 2021. The card includes the UAE Derby (G2), a stepping stone to the Kentucky Derby. The race for three-year-olds offers 100 points to the winner towards the Derby. The race often pits the winners of the UAE 2000 Guineas (colts) and the UAE 1000 Guineas (fillies) against each other.