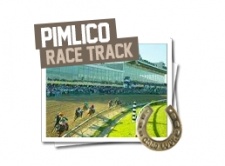 Pimlico Racecourse is one of the oldest racetracks in the country and is home to one of the most prestigious races of the year – the second jewel of the Triple Crown, the Preakness Stakes. Nicknamed “Old Hilltop”, Pimlico opened in 1870 and is located in the heart of Baltimore, Maryland. Currently, the iconic track is owned by the Stronach Group.

Thoroughbred race fans can bet on all of the biggest events at Pimlico Race Course through online racebooks. Similar to OTB sites, online racebooks allow enthusiasts to wager on the action when they're unable to visit the track themselves. Also, promotions like rebates and bonus bets nudge the odds slightly in favor of the player.

Pimlico Race Course hosts both dirt and turf racing. Their main track is a one-mile dirt oval and set inside of that is a seven-furlong turf course. There is the capacity to house over 1,000 horses on the grounds and when the infield is opened up, the track can hold over 120,000 fans. Live racing is held at Pimlico for roughly six weeks each year from early May to the end of June.

The Preakness Stakes is named after the horse who won the first stakes race at Pimlico Race Course in 1870. Three years later, the Preakness Stakes was run for the first time. The race is actually older than the Kentucky Derby and was run at several different locations before returning to Pimlico in 1909 where it found a permanent home.

Five fillies have won the Preakness Stakes, most recently Rachel Alexandra in 2009. The superstar filly defeated Kentucky Derby winner Mine That Bird by one length as the heavy favorite.

Pimlico has been a major player in the evolution of American horse racing. When an anti-gambling movement swept through the country in 1910, Pimlico, along with Churchill Downs, held steady and stayed in operation. In addition to being a pioneer in pari-mutuel wagering, Pimlico introduced the electronic starting gate which ensures a fair and equal start.

Pimlico Race Course currently is the host of ten graded stakes. The Preakness Stakes is the only one to hold coveted Grade 1 status currently but there are three long-running Grade 2 events – the Dixie Stakes, the Black Eyed Susan Stakes and the Allaire DuPont Distaff Stakes. The Dixie Stakes is as old as the track itself – it was run for the first time in 1870.

The 2017 Preakness Stakes goes Saturday, May 20. The final entries and post position draw will take place Wednesday, May 17. With odds from Bovada Racebook.

1) Always Dreaming (even): Like several of the others, the 2017 Kentucky Derby will be coming back to racing on two-weeks rest for the first time in his career. All indications are he is working well up to the race.

2) Classic Empire (4-1): The 2017 Breeders' Cup Juvenile champ will be looking for redemption after experiencing a tough trip in the Derby that seriously compromised his chances. In with a shot if he's close coming off the final turn.

3) Lookin' At Lee (11-1): Just like in the Derby, expect him to drop back early and make one big run as they are turning for home. Last year Exaggerator rode the rail to the Preakness win, and this one will want to be doing the same.

4) Gunnevera (12-1): Like Classic Empire, he had a tough trip in the Derby that hurt his chances. Talented colt has two graded-stakes wins on the season, and should be more competitive in the smaller Preakness field.

5) Hence (12-1): If, like many others, you liked him as the Derby long shot, do you bet him for the upset again? He was moving forward late, but got into traffic trouble and had to hit the breaks. A decent play at least for the exotics.

6) Conquest Mo Money (16-1): Honest colt always seems to show up and run, and skipping the Derby allowed him to focus on this race. He should be in the mix late, but the distance is a bit of a question mark.

7) Cloud Computing (20-1): Lightly raced colt has been in the money in all three of his lifetime starts, but has fallen further back as the competition level has been increasing.  Needs to take a step up to compete in here.

8) Multiplier (20-1): Only just got up in time to win the (G3) Illinois Derby by a head, but showed enough early speed to stalk off the pace behind fairly quick fractions. A small move forward might be enough to at least get a piece of this.

9) Senior Investment (25-1): Came from way back to get up in time to win the (G3) Lexington, which ws actually a Kentucky Derby qualifier run after the Derby field had already been determined. Same running style as both Gunnevera and Hence, both of whom are better horses.

10) Term Of Art (25-1): A late addition to the field ships in from California. In six graded-stakes starts, he has just the one win and one third-place finish. Another who will be coming from the back.