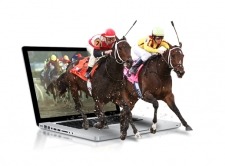 Horse racing is thriving in Canada and while the action is centered around Woodbine Racetrack located in the province of Ontario, there are several other tracks that provide thrilling Thoroughbred and harness racing action. Canada has several big-money events that attract the very best horses from around the world and provides quality year-round racing with international implications for races such as the Kentucky Derby and Breeders’ Cup.

With an online racebook, Thoroughbred and harness racing fans from around the world can get in on horse racing action from anywhere as long as they have an internet connection through a computer or mobile device. These sites are safe and secure and typically offer even better value than at a racetrack with bonuses, rebates and cash incentives which provide savvy horseplayers more ways to boost their bankroll.

Woodbine Racetrack is located just outside of Toronto and is the largest, most successful and most highly regarded racetrack in the country. Woodbine hosts both Thoroughbred and Standardbred racing simultaneously. There are three separate ovals – the turf course is a mile and a half and inside that is their synthetic main track which is currently a Tapeta surface. Inside that is a seven furlong oval over which the harness racing is held.  Woodbine hosts multiple Grade 1 events throughout the year as well as the prestigious Queen’s Plate, the Canadian equivalent of the Kentucky Derby.

Also in Canada is Fort Erie Race Track which opened in 1897. While the track has struggled in recent years, it is still the host of the second jewel of the Canadian Triple Crown – the Prince of Wales Stakes/

There is even more harness racing in Canada held at Mohawk Raceway which is owned by  Woodbine Entertainment and is located only 30 miles from Woodbine itself.

There are many significant races held at Woodbine throughout the year including the Grey Stakes, an early prep race on the Road to the Kentucky Derby. This Grade 3 event is for two-year-olds and is traditionally held in October.

The biggest race in Canada is the Queen’s Plate, held every July at Woodbine. Restricted to three-year-olds, the race is the first leg of the Canadian Triple Crown. The second leg, the Prince of Wales Stakes, is held at Fort Erie and then the conclusion of the series is brought back to Woodbine for the Breeders’ Stakes.

In addition, there are several major Breeders’ Cup races held at Woodbine in the fall including the Canadian International Stakes and the Woodbine Mile Stakes. Both races are Grade 1 events and earn the winner an automatic spot in the starting gate for either the Breeders’ Cup Turf or Breeders’ Cup Mile.

One of the richest races in Canada is the North American Cup, a $1.5 million event for three-year-old Standardbred pacers.

Off Track Betting in Ontario

The Ontario Racing Commission and the Alcohol and Gaming Commission of Ontario work together to monitor pari-mutuel wagering and horse racing within the province. OTB locations throughout Ontario allow Canadian horse racing fans to wager on fantastic events from around the world.