Now that roughly half the 2016 NFL season is in the books, the MVP ladder is starting to take shape. We're going to break down the top-five contenders for this year's award, ranking them from good to better to best. The odds for each player to win come via Bovada. 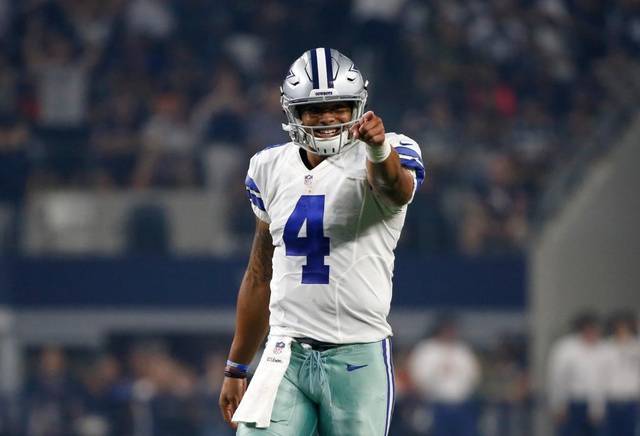 The Dallas Cowboys cannot possibly hand the reins of their offense back to Tony Romo now. Not when rookie Dak Prescott has led them to the second best record in the league.

If Prescott's current production keeps up, he will finish the season with a completion rate above 65 percent, over 4,000 passing yards and around 21 touchdowns. That's nuts.

The fact that Prescott is a rookie, though, works against him. It also doesn't help that the Cowboys' offensive line is so good. Critics tend to downplay the accomplishment of every Dallas quarterback and running back because of the luxury they've been afforded in front of them.

This is justifiable to some extent. You could put anyone behind the offensive line at quarterback, and they wouldn't want for time. But Prescott's performance goes beyond the players in front of him. He doesn't turn the ball over and he's finding ways to do just enough for the Cowboys to beat whatever opponent is in front of them.

He is, without question, currently a top-five candidate.

Many people don't believe that the Oakland Raiders, currently proud owners of one of the AFC's three best records, are for real.

But what if they are?

Well, then Carr will have some serious MVP credentials.

The Raiders own the league's sixth-best offense. They also rank in the top five of passing yards, passing touchdowns and passing attempts per game. Both of their top wide receivers, Amari Cooper and Michael Crabtree, have become some of the most dangerous covers in football.

Carr has made all this possible. And if Oakland ends up winning between 10 and 12 games, as they are on course to do, his MVP stock will explode.

The Arizona Cardinals' playoff hopes are still alive, and running back David Johnson is almost the entire reason why. Carson Palmer is a good quarterback and continues to do a great job limiting turnovers, but the passing game ranks middle of the road in all the other important categories.

Johnson, meanwhile, is on pace for 2,224 total yards, both on the ground and as a pass-catcher, and in line to tally 16 total touchdowns. All of which is absolutely absurd.

Still, Johnson's candidacy is a tad shaky. The Cardinals have a sub-.500 record and, according to NFL MVP tradition, must become a playoff team before he wins the award.

Does Julio Jones, the best wideout in football, make Matt Ryan's job under center exponentially easier? Absolutely. But he isn't the lone factor contributing to Ryan's success. In fact, Jones has been largely boom or bust, turning in a few big games while being iced by the opposing secondary in others.

Regardless, Ryan is dominating the scene. He is completing a career-high 69.2 percent of his passes and is on pace to throw for 5,272 yards and a whopping 38 touchdowns. The Atlanta Falcons have the NFL's best offense as a result—a necessity given that their defense ranks 29th in points allowed.

Should the Falcons keep hold of their lead in the NFC South and make the playoffs, it's Ryan who will be most responsible. And that renders him one of the best MVP bets out there.

The 39-year-old Tom Brady has wasted little time seizing control of the MVP race, both on the field and at the sportsbooks. Though he missed the first four games of the season, he is still tracking toward 4,000 passing yards and around 36 touchdowns. His completion percentage at the moment, 73.1, is also by far and away the highest of his career.

Not even all of that, though, is reason enough to back off Brady. If voters choose the actual MVP to be this year's MVP, it will be Tom Brady.