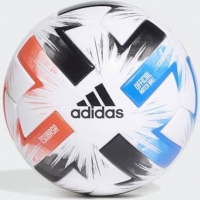 Soccer is a global sport - it is played worldwide, and has the largest following and reach than any of the professional sports. While soccer isn’t as widely regarded in the United States or Canada, it is a huge presence in the Latin and South Americas, as well as Europe. There are many professional soccer leagues, but in Europe, they’re called football leagues - not to be confused with American Football. If you are wondering, yes, it is possible to bet on soccer online.

Betting on soccer has been around for decades, especially in European countries. Soccer has arguably the most intense fanbase worldwide, for any sport, and with that, comes sportsbooks offering odds for each and every game. If you’ve found yourself on this page, you are interested in betting on soccer, and we are here to help.

But first, let’s dig into the top soccer leagues.

While Americans are probably most familiar with Major League Soccer - the league based in the United States, there are a few other major soccer leagues that offer exceptional talent based in Europe.

The MLS is newer than the European leagues, in an effort to bring professional soccer to North America, and while it doesn’t boast the star power you’d find in Europe, it still packs a punch for sports bettors. The league runs opposite the European leagues, with its season taking place from March to November. Twenty-six teams compete each year, with 23 based in the United States and three based in Canada, and the league's popularity is continuing to grow.

To learn more about Major League Soccer and how you can bet on it, head over to our MLS betting guide.

The EPL is the most-watched and most popular soccer league in the world, with exceptional talent and world-renowned teams like Manchester United and Chelsea. The league boasts 20 teams who play 38 matches a season. Some of the top talent in the world plays in the EPL, which runs from August through May of the following year - making it possible to bet on soccer year-round.

For a more in-depth look at English Premier League betting, head over to our EPL betting guide.

Also known as the Primera Division in Spain, is the top Spanish football league and has a rich history in its century of existence. Teams like Real Madrid and Barcelona host some of the best players in the world like Cristiano Ronaldo and Lionel Messi to name a few, which garners plenty of attention each and every season. The season runs from August to May - much like EPL and Serie A.

The Bundesliga is the German soccer league - and while it may not be the most popular league, it has record-breaking attendance with over 45,000 at each game - much higher than you’d find at EPL. With 18 teams competing from August to May alongside the other European leagues, you can find great soccer betting opportunities on any given Saturday or Sunday.

Serie A is a professional soccer league based in Italy, that boasts top Italian talent, as well as recruits from around the globe. Serie A is one of the oldest soccer leagues, founded in 1898, and has been operating as a round-robin tournament since 1929. The Serie A season runs during the same timeframe as the EPL, from September to May.

The UEFA Champions League is also known as the European Cup, and contests top European clubs through group and knockout formatting. Founded in 1955, it became the most prestigious soccer tournament, being hosted in late June after the European leagues have concluded, and finishing up in mid-August.

Betting on this tournament is popular due to the ramp-up throughout all of the league’s regular seasons, if you’re looking for some Champions League betting odds, we have a guide for that.

The Football Association Challenge Cup is an annual knockout tournament played in England and/or Wales, and is known as the oldest national soccer competition in the world. There is also a FA Women’s Cup that is held and is open to any eligible club down to level ten of the English Football League system.

The FIFA World Cup is the most highly regarded and anticipated men’s national soccer tournament. Viewership for the FIFA World Cup exceeds the Olympics, with estimates in the 700 million tuning in for the final matches each year. 32 teams qualify to represent their countries and compete to bring home the World Cup trophy every four years.

The UEFA European Championship is a tournament that contests teams from the Union of European Football Associations, determining the continental champion of Europe. It’s held every four years, on the even-number year between the World Cup tournaments. The 2020 Euro Cup was postponed until June 2021 due to COVID-19.

How to Bet on Soccer

When it comes to betting on soccer, you will see a few different betting types compared to regular North American sports like football or basketball. While they are similar, there are some big differences in how you would place your wagers on soccer specifically.

While you may be used to the regular moneyline style where there are two teams, and you have to select the winner between those two, the three-way moneyline adds another important game factor when it comes to soccer betting: the draw.

Your 50% chance of winning your bet is reduced to 33.3%, and you now have three options to choose from. Soccer games are notorious for resulting in ties and being pushed into extra minutes, so having this as an extra option in soccer betting makes complete sense. Looking at the three-way moneyline as a Win, Lose, or Tie decision makes things a lot easier.

The draw simply reflects the 90 minutes of regulation time - so if the game goes into extra minutes after regulation and a team scores at minute 94, the draw would still cash at the end of the day, and a bet on either side would lose.

The draw will always boast the highest odds, then you will have the favored team with the lowest odds. If you believe that after 90 minutes of play, the teams will remain tied, you should select the draw.

Here’s an example of a three-way moneyline:

In this case, Toronto FC is favored to win this match, and Los Angeles is the underdog. The draw is unlikely but in the case that they do tie after 90 minutes, the draw would pay out $300 on a $100 wager.

Soccer spreads closely resemble traditional pro sport point spreads, but are called goal lines in soccer. This is because soccer is a sport that doesn’t use points for scoring, rather they use goals - you would see the same thing in baseball (runline) and hockey (puck line).

The spreads in soccer are relatively low, as many soccer games aren’t overly high scoring. A common spread you may see is -0.5/+0.5, which means that the oddsmakers are giving the underdog a head start of one goal before the game even begins. This means that the underdog needs to win the game, and in the case of the favored team, they will need to win by one or more goals.

In the case of a -2.5/+2.5 spread, the oddsmakers are predicting the favored team to win by more than three goals, and the underdog, in this case, needs to lose by less than three, or win the game.

Again, another betting type that is a bit different for soccer than you may be used to if you’re used to betting on basketball or baseball. While it’s similar in the aspect that it is betting the over or under on the total score for both teams combined, it does have a little twist. The totals are shown in multiples of .25 since the scoring in soccer is so low usually. You may see totals of 2.5, 2.75, 3.0, etc.

The best part about the totals is that it’s an easy bet to place, and also subjective and you don’t have to pick one team over the other. This is a great bet to place if you can’t decide which team will win, or don’t want to bet for or against a certain team.

If the total in your game is 2.5, you will need to decide which side you want to bet on - the over or under. If you choose the under, and the game ends with a score of 1-1, your bet will lose. If you chose the over and the game ended 4-2, you would win.

We have reviewed and researched the top online sportsbooks in the industry and we are confident you will have a great soccer betting experience at any of the above choices. They offer great soccer odds and even some special soccer bonuses during the season.