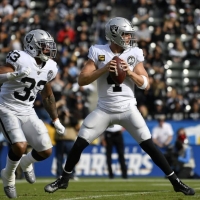 Are there any wagers that are more enticing than an NFL Futures one? For every single NFL bettor out there, making a futures bet is always going to be an intriguing option, especially if they are feeling confident that a particular team will take down the rest of the field and capture the Super Bowl title. But, what other kinds of NFL futures bets can you make either before or during the season?

With the way things work during the NFL offseason, you're going to be able to find NFL future odds well before the regular season gets underway. In fact, the latest odds for the SuperBowl, plus NFC & AFC Conference winners for 2021 are now available. This page was last updated on November 6, 2020:

Who will end up winning the conference championships? Do you have someone in mind for the NFL MVP odds? These are just two examples of the multiple different NFL future odds that you're going to be able to find. We break that down and more in this piece.

It goes without saying, but the most popular NFL Futures Odds that people are going to be looking for each and every year are the ones for the Super Bowl, one of the biggest sports events of the year. Regardless of the time of year, even in the heart of the offseason, you're going to be able to find these odds for your NFL betting needs.

Depending on the number that's listed, you'll have a strong idea on what the Vegas Odds and the Vegas oddsmakers think of a team's chances of taking home the Lombardi Trophy. If a team has 8-1 odds, that means they're surely a top contender to make it to the big game.

However, if a different team has 100-1 NFL odds, we don't have to tell you twice that betting on them probably isn't going to be a great idea. While putting down $100 for a bet like that would see an incredible payout, what are the chances of it actually happening? The odds just aren't in your favor.

At the same time, we have seen some underdog teams go on to make some serious runs to win the Super Bowl out of nowhere. Before the start of the 2017 NFL season, the Philadelphia Eagles had Vegas Insider NFL Futures odds set at 50/1. No one thought they'd have a chance at winning the Super Bowl, with the Patriots the strong favorites throughout the year.

Yet, even with Carson Wentz going torn with a torn ACL that season, Philly surprised people each and every week, eventually making it to the Super Bowl behind the arm of Nick Foles. Leading up to the Eagles showdown with the Patriots for the Lombardi Trophy, the Eagles remained underdogs and New England was a solid favorite.

Once again, the Eagles pulled off one of the biggest upsets NFL fans have seen, taking down Tom Brady, Bill Belichick, and Co. In that win, the Eagles delivered the now infamous 'Philly Special' to help them secure the victory. It was quite an impressive feat to win. Imagine had you bet on them before the season?

The @Eagles unleashed the Philly Special two years ago today 🦅

Those 50-1 odds would have resulted in an amazing amount of return on your investment. That just goes to show you that sometimes it really does pay off to bet on your favorite team.

Check out the underdogs' chances to win the NFL trophy at the Super Bowl odds page.

As you might expect, the NFL MVP Odds will also be a popular target for bettors to take a look at. These odds are set before the start of the regular season, but then you'll also see some movement throughout the year as well depending on how good or bad someone is performing.

For example, you might see a quarterback have MVP odds of 12-1 before his Week 1 showdown. But then, his team could end up going 3-7 to start the year and he has more interceptions than he has touchdowns. Because of that poor showing, you'll surely see his odds drop tremendously.

On the flip side, you could also see someone see their odds go way up. The Green Bay Packers may have a veteran quarterback go down with an injury during Week 3. Because of this, their backup signal-caller steps in and is a breath of fresh air.

Over the next seven weeks, the Packers go 6-1 and that No. 2 QB throws for 18 touchdowns and only three interceptions, and has Green Bay at the top of the NFC North standings.

With this happening, that quarterback will see his odds to win NFL MVP go through the roof. There's always going to be different variables that will change the way the odds go up or down. Paying attention to a team's opponents late in the season too, and considering whether or not you think a player's squad will make the playoffs is something you want to think about as well.

NFL Rookie of the Year Odds

The NFL Rookie of the Year odds have now been released and are subject to change as the season gets underway. The odds were last updated on November 6, 2020:

If a quarterback is taken with the No. 1 pick of the NFL Draft, you're likely going to see him have the highest odds of winning NFL Rookie of the Year. However, it's important to take a look at a team's depth chart. If that quarterback was selected, but he'll sit his first year behind a veteran quarterback, then you of course wouldn't bet on him to win Rookie of the Year.

However, say the No. 15 overall pick is a quarterback and he's the favorite to win the job. Entering the season, he'll be going up against another QB who struggled throughout the previous year.

That team picked a QB with their first-round selection for a reason: they want him to compete for the starting job right away. You may wait to see if he wins the job. If he does, and his odds are decent, it'd be a smart idea to bet that No. 15 overall player. Think about it, if he's going to start in his first year, he's going to have the opportunity to put up some pretty impressive stats.

There are certain different scenarios that play out too. For the Kansas City Chiefs, starting running back Damien Williams opted out of playing in the 2020 NFL season because of concerns of the coronavirus. It just so happens Kansas City used its first-round pick on LSU speedster Clyde Edwards-Helaire. Leading up to the season, especially with Williams opting out, Edwards-Helaire immediately saw his odds skyrocket.

Peter King: “Clyde Edwards-Helaire got the first 4 snaps in 11-on-11.” I’d say Andy has big plans for the kid 👀 pic.twitter.com/LiCMFFMgwJ

The Chiefs' offense is always going to be explosive, and for Edwards-Helaire getting the opportunity to take over as the lead back from the start was only going to boost his odds for Rookie of the Year. This is a prime example of how things can fluctuate. Injuries also have a major impact on how things might play out.

It's going to be crucial to keep in mind how your NFL MVP Predictions can change throughout the year. You could have one star player in mind before the season starts, but then he sees a dramatic fall in his level of play and his odds dwindle throughout the season because of it.

But, if you picked a player at 10-1 and then his odds drop to 40-1 later in the season, you're still locked in with those 10-1 odds from when you initially dropped your bet. This can prove to be a blessing in disguise if you end up picking an underdog before Week 1 action gets underway in the NFL.

For example, you could have gone with a complete hunch and picked a Cardinals running back with 50-1 NFL MVP Odds. Clearly, the Vegas NFL MVP Odds were not in that particular player's favor from the moment teams took the field to start the campaign. However, he goes on to average a mind-blowing 145 yards per game through the first 10 games and has a total of 23 touchdowns.

Because of this, his NFL MVP odds have gone from 50-1 to 8-1, and he's considered a favorite to lift the trophy at the end of the year. While some people might jump at the chance to take him with 8-1 odds, you'll have nothing to worry about because your 50-1 odds wager has already been placed and the new numbers won't have any impact on you whatsoever. That's the beauty of sometimes going with an underdog to win NFL MVP.

Who will win the NFL Championship?

Wanted: One crystal ball. Must be able to see at least one year into the future. That’s how some sports bettors feel when it comes to wagering on NFL futures bet. While everyone is just about as clairvoyant as everyone else, there are methods that handicappers can employ to cash in big when making NFL future wagers. The process begins with dedicated research and moves forward from there. Please read on as we explore and explain this underrated, and often dismissed as money burning, entertainment, and sports wagering option.

Big payouts, from relatively small investments, are the most attractive NFL futures wagering perks. Head to the top-rated online sportsbooks, listed on our Top 5 Table, once you are ready to make a futures bet.