Nassim Nicholas Taleb's 2001 offering Fooled by Randomness: The Hidden Role of Chance in Life has been hailed as one of the "75 Smartest Books of All Time" by Fortune and earned critical raves for its content. Once you dig into the pages, you can understand why.

A mixture of analysis,statistics, finance and philosophy, Fooled by Randomness drives home the reality of the random. Humanity's desire for explanation can sometimes be a futile pursuit when we try to establish patterns where they do not exist. Taleb's book isn't shy about calling out those that claim to have skill when really they've just been fortunate.

Written in a style that's engaging and accessible (if a touch pompous) while also packed with sensible points about our weakness in scrambling for answers. Taleb argues that humanity is guilty of making irrational decisions and often fall victim to misinterpreting statistics to mean something different than what they actually represent. He presents the viewpoint that if we weren't so devoted to sorting out causality, we could see the world for the bastion of randomness that it truly is.

Taleb's tone in discussing these matters is a "your mileage may vary" style proposition. He's been slammed by some as pretentious and condescending, but his champions find his writing in Fooled By Randomness to be the proper mechanism to sell his points. The author's Wall Street background helps frame the arguments in the book as genuine concepts and elevates the items presented beyond the realm of the academic. If Taleb's style clicks with you, the book will too. 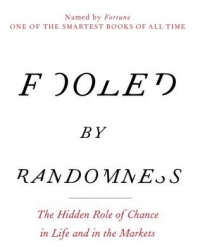