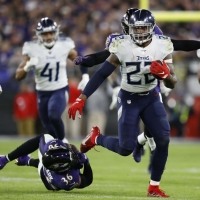 There's been a shift in dominance in the NFL, with both conferences in the league showcasing just how deep the fields are on both sides. In the AFC, though, some top-calibre organizations have emerged in recent years as the best of the best, with the postseason being as fun as ever to bet on. When it comes to the AFC Championship Betting Odds, there's really going to be too many for you to keep track of.

Here at Online Sports Betting, all of our partners are going to be here to help you make your best bets. Will the New England Patriots get back to the Super Bowl after winning the AFC?

Will Patrick Mahomes and the Kansas City Chiefs keep on going strong, or will Lamar Jackson and the Baltimore Ravens emerge victoriously? Hey, there's even some underdogs to keep an eye on. We take a look at that and much more in this piece.

Once the NFL postseason gets underway, there will be seven teams from the AFC who are hoping to call themselves the conference champions. Remember, previously, only six teams would make it to the playoffs from each conference, but the rules changed starting in 2020. After the Wild Card Round and the Divisional Round is complete, you'll then be able to see which two teams will be set with the AFC Championship Lines.

While there will be odds for the AFC Championship far before the postseason gets underway, things won't be set until two teams emerge who are ready to play for all of the marbles. When the title game does arrive, you'll be able to find moneyline odds, futures bets, prop bets and so much more.

"As an offense, you have to be able to keep up with their offense. We stalled on a couple of drives and they took advantage of it. Their offense is very hard to stop."

— @KingHenry_2 on how the Chiefs were able to stop the Titans in the AFC Championship Game pic.twitter.com/f6uuK5N6A9

In terms of prop bets, a fun one would be deciding how many touchdowns a player might end up with for the AFC Championship Game. If the Kansas City Chiefs and Las Vegas Raiders are ready to battle it out, you might see a number set of three touchdowns for Patrick Mahomes. If you take the over on that, Mahomes would have to finish with four touchdowns for you to win your bet. Three scores is a push, while anything lower is a loss.

At the end of the day, it really all depends on which two teams are meeting in the AFC title game. So, who has the best odds to win the AFC and move on to appear in the Super Bowl? Take a look for yourself below. These odds were last updated on January 18, 2021:

For the AFC Championship Spread, these will be the numbers that football fans will really want to sink their teeth into as soon as they are made available. Again, you'll need the two finalists to be set for these numbers to be presented.

This AFC Championship over-under spread is incredibly popular and always will be. For the Ravens-Titans example of 48 points, this would make sense because both teams have been known for having incredible defenses. At the same time, Lamar Jackson is one of the most electric players in the league, which is why you might see a number close to 50.

Stopping him truly is no easy task, but the Titans did upset Baltimore in the AFC playoffs in the winter of 2019. That tells you that anything can happen in the postseason.

For everyone interested in Betting AFC Championship lines, the good news is that all of our sportsbook partners here at Online Sports Betting will have everything you need. The great thing with our partners, including the likes of Bovada and so many others, is that all the odds will be updated at a moment's notice.

Story: Per @NextGenStats, Cam Newton was clocked at 19.2 mph on his 11-yard TD run, which is his fastest TD run in the past 5 seasons. Newton's mobility was a top storyline in Week 1, but how much will it continue? Thoughts from Josh McDaniels and more:https://t.co/e8Vvul5rpl

For the AFC Championship betting lines, things of course are going to be fluctuating throughout the season if teams go on sudden surges, or if other top contenders experience some unfortunate injuries. This is always going to be the case in the NFL.

You might see a team start off 10-2 on the year and be the odds-on favorite to win the AFC title game. However, in Week 14, their start quarterback suffers a serious ankle injury and will be out for the rest of the season. Because of this, that team's odds will sink to the ground. Not only will that have an impact on the AFC Championship odds, but also on their Super Bowl odds as well.

How to bet on AFC Championship Game

You might be asking yourself How to bet on AFC Championship Game lines, and it's as simple as it sounds, especially if you go with our sportsbooks partners. As soon as the two teams are ready to play for the conference title, you can bet on the moneyline, or even take a look at some of the prop bets.

As we mentioned above, there will be countless different prop bets available for you to place your wagers on. At the same time, if you're confident in one of the AFC teams to win the conference championship, why not get a futures bet in?

Before the start of the regular season even, you'll be able to find the latest odds on which teams are considered prime contenders to win the AFC. If you do bet before Week 1 gets underway, you'll see a huge payout because you're predicting something to happen so far in advance.

At any point during the regular season too, you can place a bet on who you think will win the conference. If they end up coming through for you, the return on your risk of a bet will be pretty darn high.