For the longest of times, the Jacksonville Jaguars have been doormats for the rest of the NFL. That hasn’t quite changed (yet), but ownership has put the pieces in place to do so. A Super Bowl-winning coach has been hired (Doug Pederson, formerly of the Eagles) and a talented quarterback was picked first overall (Trevor Lawrence). Only time will tell if anything changes in Jacksonville but while we wait, we can make money off the team whilst betting. We’ve compiled this handy betting guide that covers all things Jaguars. Keep scrolling to see what we have for you when it comes to betting on the franchise.

The widget will help bettors look ahead to the upcoming Jacksonville Jaguars game. Keep a close eye on the game odds, as they will change with many intangibles such as injury reports and weather conditions.

My Team's Next MatchJacksonville Jaguars

This feature charts the entire Jacksonville Jaguars schedule. Divisional matches are the most important since each team in the AFC South plays a home-and-away game against their rivals, six in total for the season.

What Are The Current Jacksonville Jaguars Standings

Sometimes, you have to dive into the numbers to gain a betting edge. Your team may have a winning record but they’re brutal in conference play. This feature may help you find those answers. You’ll see Jacksonville Jaguars standings against the whole NFL.

How To Bet On Jacksonville Jaguars

You can bet on Jaguars in a multitude of ways — and we mean a multitude. Next, we’re going to cover the five umbrellas which all Jaguar-related bets will fall into. You have these five betting options across top-rated NFL betting sites:

Jaguars betting is most common when it comes to spreads. The spread is a “handicap” bettors will put on each team in a game. The favorite must “cover” this handicap and win the game by more than that. However, the underdog — which Jacksonville commonly is — must lose the game by less than that handicap, if not win it outright. Spreads can be denominated in whole numbers or half too (e.g 3.5 or 4.5, which is commonplace in the NFL).

Moneyline bets are not nearly as intricate as spreads. This wager is a simple outright bet on who wins — that’s it. However, Jaguars betting odds will be much more sporadic in this case. Whereas spreads are almost always -110 bets, moneylines will change from game to game.

The most amount of Jaguar odds will be available in the prop market. That’s because props, which are essentially mini-bets, can stretch a lot of boundaries. Think of props as fantasy football-type bets. That’s because you’ll find plenty of props around the statistical performances of players. Who scores the game’s first touchdown and over/under on catches for a tight end would be examples of props.

Something like the Jaguars odds to win Super Bowl would be a futures wager. Futures are long-term bets on season-long outcomes. The Super Bowl is an obvious and popular example, but similar bets exist for conference and division champions, or award winners like Rookie of the Year. 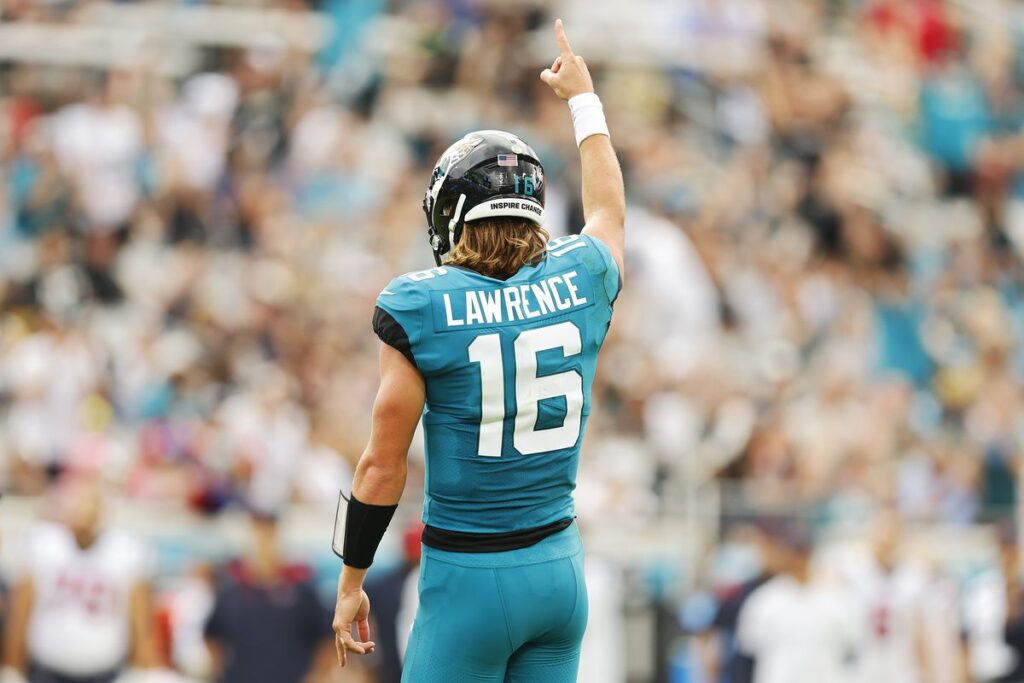 If you’ve read this far into our betting guide, you’re armed with all the information to bet on this struggling franchise — that is, besides actually choosing which bets to make. We can’t help you there (there are too many Jaguars bets out there), but we can pepper you with overarching tips. Whenever dropping money on this team, keep these three tips top of mind:

The Jaguars and Carolina Panthers joined the NFL as expansion teams in 1995. In years since, the Jaguars have qualified for the playoffs seven times, most recently in 2017. That was also the last year Jacksonville had a winning record. They've won two division titles, in 1998 and 1999. The team plays their home games at EverBank Field and moved from the Central Division of the American Football Conference to the AFC South in 2002. The Jaguars have struggled since entering the AFC South fray.

The No. 71 worn by offensive tackle Tony Boselli, the Jaguars’ very first draft pick, has not been worn since his retirement in 2002. The number has been taken “out of service,” according to team officials. Boselli became the first Jags player elected to the Pro Football Hall of Fame in 2022.

Quarterback Mark Brunell is the team’s all-time passing leader throwing for more than 25,000 yards and 144 touchdowns. Fred Taylor is the club’s all-time rushing leader, with more than 11,000 rushing yards and 62 TDs.

Remember earlier when we were talking about futures betting? Welp, the Jaguars Super Bowl betting odds are exactly that. And as you can guess for this franchise, those odds are usually on the longer end. If Lawrence can develop into a franchise quarterback, things might change. But for now, we’d say to be cautious if betting Jacksonville Jaguars Super Bowl lines — keep bets small, if any.

This franchise came oh so close to making a Super Bowl a few seasons ago when, get this, Blake Bortles was under center. They would blow a double-digit lead to the Patriots in the AFC Conference championship game that year. Without an elite-level QB, that’s probably as far as any team in the NFL can really go in this QB-driven league.

Where Can I Bet On Jacksonville Jaguars Online

If you've read this far, you know enough about the Jags to put money down on them. Have a look at the online sportsbooks below and pick the one that fits you best. If you need help picking, then pour over our latest online sportsbook reviews.