It’s flown under the radar, but the Titans have been one of the NFL’s most consistent teams as of late. Almost always playoff contenders, but rarely ever of the caliber of a Super Bowl team. That consistency actually makes them a good team to bet on. This has all led us to creating this in-depth Titans betting guide. We’ve packed it with all the information you’ll need to bet on Titans so bookmark it now and reference it from time to time again.

Use this feature to track the next Tennessee Titans game. Bettors will want to pay attention to key details like who’s home, current odds, and if it’s a short week, for instance.

My Team's Next MatchTennessee Titans

The entire Tennessee Titans schedule can be found underneath. Remember, it’s a 17-game playing schedule now — not 16. This change was enacted in 2021 and isn’t going away.

What Are The Current Tennessee Titans Standings

Pay close attention to the Tennessee Titans standings underneath. In particular, look how they compare the Colts, Jaguars, and Texans — all division rivals in the AFC South. All four teams will be jockeying for division supremacy and you can see who’s currently winning that battle below.

How To Bet On Tennessee Titans Titans betting odds can largely be boiled down to five categories. To make it easy on you once you’re at popular NFL betting sites, we’ll quickly explain how each of these five bet types works:

Moneyline is the simplest of all bets available. This wager is a pick on the straight-up winner of the next Tennessee game. Two options — the Titans or their opponent that given week. Just don’t expect the Titans odds to stay stable. They will swing week to week based on the current matchup.

Spreads are perhaps the most popular of Tennessee Titans betting lines — or any other team for that matter. Spreads will add a “handicap” that the team must play with. As favorites, the handicap means the Titans must win by more in order to win. But the opposite is true if Tennessee is underdog. In this scenario, the Titans “cover” by losing by less than their handicap or just outright winning the game.

Over/under bets are different in that it’s also strictly concerned with the game’s score — but not on who wins and losses, but rather the points combined for by Tennessee and its opponent. Bookies will set a point total beforehand thus giving bettors the option to bet over or under on what the actual final tally is.  Single quarters, halves, and full games can all have over/unders to wager on.

Props are much harder to define. That’s because these can vary wildly from bet to bet. But the easiest way to think of props are as side bets, mostly on statistical outcomes. For instance, on over/under on the longest pass completion made by the Titans or a wager on which team scores first. Those are prototypical props but you can extrapolate them across so many other statical performances.

The prime example of a futures bet is the Titans odds of winning the Super Bowl. That’s a long-term outcome, which is the defining trait of futures. Similar examples involve individual player awards like MVP or Offensive Player of the Year, which Titans’ own Derrick Henry won in 2020. Depending on when you play your bet, these futures could take months to actually pay out since awards and titles are handed out at year’s end.

There’s no better teacher than experience. The more you bet on the Titans, the more you’ll learn. However, we do have some words of wisdom — that we’ve learned through trial and error ourselves. We wanted to share a few nuggets below to help you out:

Before they were the Tennesse Titans, they were the Houston Oilers. The team was founded down in Texas by Bud Adams — an oilman, hence the team name. They began as a charter member of the American Football League in 1960. Success came fast for the franchise as they played in the first three AFL championships, winning the first two in 1960 and 1961.

The franchise hit a rough patch once the AFL-NFL merger went through in 1970. Between that year and 1986, the Oilers made the playoffs just three times. But things turned around in 1987 and the team qualified for the postseason a whopping seven times in a row.

Adams announced the team was moving to Tennessee in 1995. They remained in Houston in 1996 with almost no fan support before heading north to Tennessee. The Oilers' name stayed on for two years before they officially became the Titans in 1999 — the same year, its brand-new stadium opened in Nashville (they were playing in Memphis the two years prior).

It turned out that the 1999 season was magical, and not just because of the new stadium and nickname. The Titans were involved in two of the most famous plays in NFL history that year — one that went their way, one that didn't. The first was the "Music City Miracle" when Tennessee used a series of laterals at the end of the game to beat Buffalo in the playoffs as time expired.

That miracle win keyed them all the way to the Super Bowl, where they faced off against the St. Louis Rams. Down seven points, the Titans drove the length of the field to tie the game with time expiring. This time, they were denied one yard short of a game-tying touchdown in the most razor-close defeat in Super Bowl history. 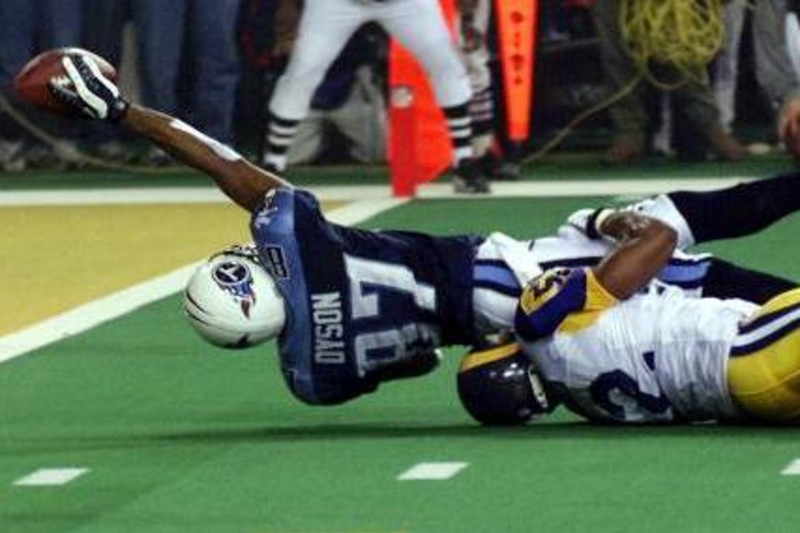 Like we said at the very beginning of this guide, the Titans are almost always in the playoff mix but never really Super Bowl contenders. That's reflected in the Titans Super Bowl betting odds — which are above average, but certainly not among the top-5 favorites. You could argue that the quarterback position is responsible for that.

In the NFL, you need an upper-echelon quarterback to really compete for championships. Bettors and Titans fans alike don’t believe Tennessee has that at the moment. We wouldn’t be in a hurry to wager on a Tennessee Titans Super Bowl win until that quarterback narrative changes inside the franchise.

Where Can I Bet On Tennessee Titans Online

Have a look at the online sportsbooks below and pick your favorite so you can get involved in all the NFL action. We've written in-depth sportsbook reviews to make your choice all the easier.