Carolina is amid a full-on rebuild. It’s tried and failed to replace franchise cornerstone Cam Newton the past few years to no avail. The Panthers might not be Super Bowl contenders anytime soon but that sure doesn’t mean there are no betting opportunities on the team. In this betting guide, we’ll explain what we mean. By the time you’re done reading this, you’ll know everything there is to know about Panthers betting.

The next Carolina Panthers game is your nearest opportunity to bet on the team. You’ll see it listed underneath, as well as the game’s odds.

My Team's Next MatchCarolina Panthers

This feature charts the entire Carolina Panthers schedule — all 17 games. Take a look and begin planning your long-term strategy.

What Are The Current Carolina Panthers Standings

The Carolina Panthers standings are updated after each game in the below widget. Pay close attention to how they fare against the Buccaneers, Falcons, and Saints — who are NFC South rivals.

How To Bet On Carolina Panthers

Panthers betting odds come in all shapes and sizes, but if you really boil it down, there are five ways to bet on Panthers. We’re about to quickly explain each one to give you a macro view of your options at respected NFL betting sites:

Of all the Carolina Panthers betting lines, this is the easiest to pick up on. It’s a simple bet on who wins Carolina’s next game — them or their opponents. Expect the Panthers’ odds to swing wildly from game to game on this line, that is until they find more stability.

Spreads add more nuance to Panthers odds. With this bet, Carolina will play the game with a points handicap per se. As underdogs, they must not lose by more than this handicap in order to cover the spread. The opposite is true in the event the Panthers are favorites. Carolina would have to win the game by more than the spread in order to cash betting tickets on that line.

If you’d rather not concern yourself with whether Carolina is winning or by how much, then over/under might be the bet for you. This wager is solely concerned with how many points the Panthers and its opponent combine for. Bookies set a number beforehand and bettors have the choice to pick whether the score will be over or under that figure.

Props are the most open-ended of all Panthers bet types. That’s because there are so many possibilities here. Props, generally speaking, are on mini-outcomes within a game not related to the final score. Most of these outcomes center on statistics — both at the team and player level. For the team, a prop could be a bet on who scores the game’s first touchdown. Player-wise, an over/under number can be set on how many passes the quarterback completes. Those are two small examples, but you can extrapolate that across the board.

Futures are all about long-term outcomes, not single games. By long-term, we mostly mean the end of the season. That means lines on whether Carolina wins its division or conference. You could also wager on different Panthers players to win an award such as Defensive Player of the Year. Alright, let’s get into the nitty gritty of Carolina wagering — how to actually make money off this team. We’re about to share three betting rules that have guided us to wins more times than not. Read this carefully:

North Carolina native and businessman Jerry Richardson was instrumental in bringing an NFL franchise to the city of Charlotte. With his money, influence, and connections, the city won a bid from the NFL in 1993 to birth a new franchise. They and Jacksonville would join as expansion franchises two years later in 1995. [+]

Success came quickly for the new Panthers franchise. They finished their first season at 7-9, an all-time best for NFL expansion teams in their first season of play (more than doubling the win total of the previous record). In their second season, the Panthers improved to 12-4 and lost the conference championship to the eventual Super Bowl champions. However, the team regressed to the mean afterward and missed the playoffs consecutively until 2003.

But boy, was that 2003 season an outlier. Carolina, behind the electric passing-to-receiver combination of Jake Delhomme and Steve Smith, stormed all the way into the Super Bowl game. With one minute and eight seconds left in the game, the Panthers tied the Patriots at 29-all. However, they were denied overtime when surprise, surprise Tom Brady led New England down the field for the go-ahead kick. That was Brady's second of seven Super Bowls, but perhaps the closest win of all. 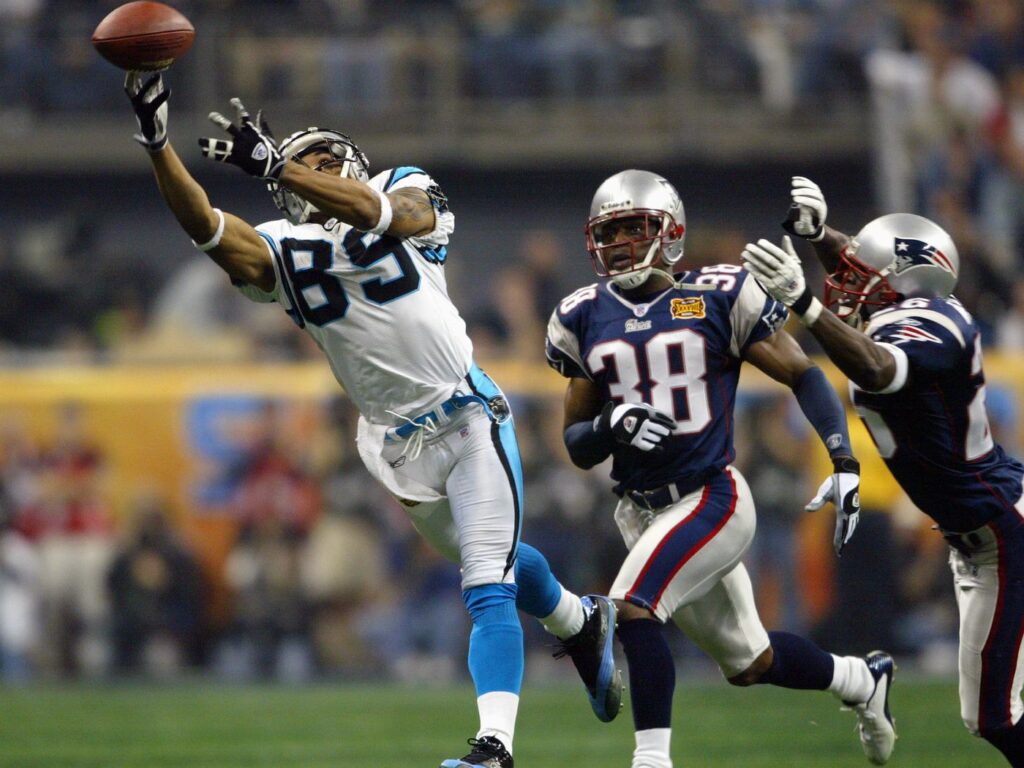 Carolina would go on to make several more playoff appearances but they wouldn't get a second crack at the Super Bowl again until 2016. This team the road was paved by quarterback Cam Newton, who the franchise took first overall in the 2011 Draft. Triumph was denied here again when the Panthers lost 24-10.

All in all, Carolina has played in the postseason seven times — six times by the way of winning the NFC South. Former faces of the franchise, Newton and Smith, are long gone which has left the current state of the franchise somewhat in limbo.

Let’s not kid ourselves, the Panthers' Super Bowl betting odds are shot in the near term. This team hasn’t won a playoff game since 2015 — a year it made the Super Bowl actually — and it’s probably going to take gradual success before a championship win is even thinkable.

Most of all, Carolina has to hit on the quarterback position to warrant a Carolina Panthers Super Bowl win. The team had a decade of stability with Newton under center but you can see what’s happened since his departure, a musical chair game of quarterbacks. It’s near impossible to win the Super Bowl without a competent QB, and that's just the facts of the matter.

Where Can I Bet On Carolina Panthers Online

Anytime you’re looking for a site that takes bets on the Carolina Panthers, then come on back here. Each of the listed sites are trusted gambling options as detailed in our unbiased sportsbook reviews.