Da Bears, as they’re affectionally called, have one of the most rabid fanbases in the NFL. That, plus playing in the huge Chicago market, means the Bears get a lot of love from bettors at the top-rated NFL betting sites. Before you join the crowd, you might want to read this entire betting guide we’ve personally crafted. We’ve packed it with all the must-know details about betting Chicago. Consider this a one-stop shop on Bears betting!

Your next chance to bet on Chicago will be listed below. This widget will mark the next Chicago Bears game all season long.

My Team's Next MatchChicago Bears

The up-to-date Chicago Bears schedule is featured underneath. All 17 games can be found here, which helps you gameplan your bets for the entire season.

What Are The Current Chicago Bears Standings

The Bears compete in the NFC North alongside the Lions, Packers, and Vikings. You can gauge how they sit against them with the Chicago Bears standings below. This is updated after each game so you always have the current lay of the land for the team.

How To Bet On Chicago Bears

Bettors will not lack Bears betting options. This team is a popular choice at the top-used NFL betting sites and cause of that, bookmakers roll out the menu when it comes to Chicago football. You’re looking at five different bet types regularly available on the team and they are as follows:

The most straightforward way to bet on Bears is through the moneyline. This wager is strictly concerned with whether Chicago will end up in the win column. That’s really all there is to it. Moneyline odds will swing wildly from game to game based on how the Bears match up to their opponent.

There’s more nuance with betting the spread than moneyline. In this wager, Chicago will be playing with a pre-set handicap of points. If they are betting favorites, then they need to win the game by more than that handicap. Though, if they are underdogs, the Bears must keep their deficit within that handicap — or win straight up. When it comes to spreads, Bears betting odds will almost always be -110. The only thing that changes from game to game is that point handicap.

The game’s point total is the crux of the over/under bet. Bookmakers will set a number in advance and bettors must simply choose whether the score will go over or under that amount. By score, we mean what the opponent tallies too, not just the Bears. The number is a combined point total. Over/unders can be set on the final score after four quarters or each of the halves.

Props are a perfect way to mix up the betting routine. Bears odds here are rarely ever focused on the game’s actual outcome like spreads or over/unders. Instead, these are mini-bets, most of which revolve around player statistics. A prime example would be the first player to score a touchdown.

The four Chicago Bears betting lines we covered before this all relate to single games. That is not the case with futures, which as the name hints, are about distant outcomes at the end of the year. That includes team outcomes (Super Bowl or conference title win) and players ones too (MVP, Offense Player of the Year, etc.).

We’d be lying if we told you that betting is easy. But at the same time, it is still more than possible to win more than you lose — so long as you have a plan ahead of time. Betting on instinct alone isn’t enough to win consistently. Start with these three tips if you want long-term success: 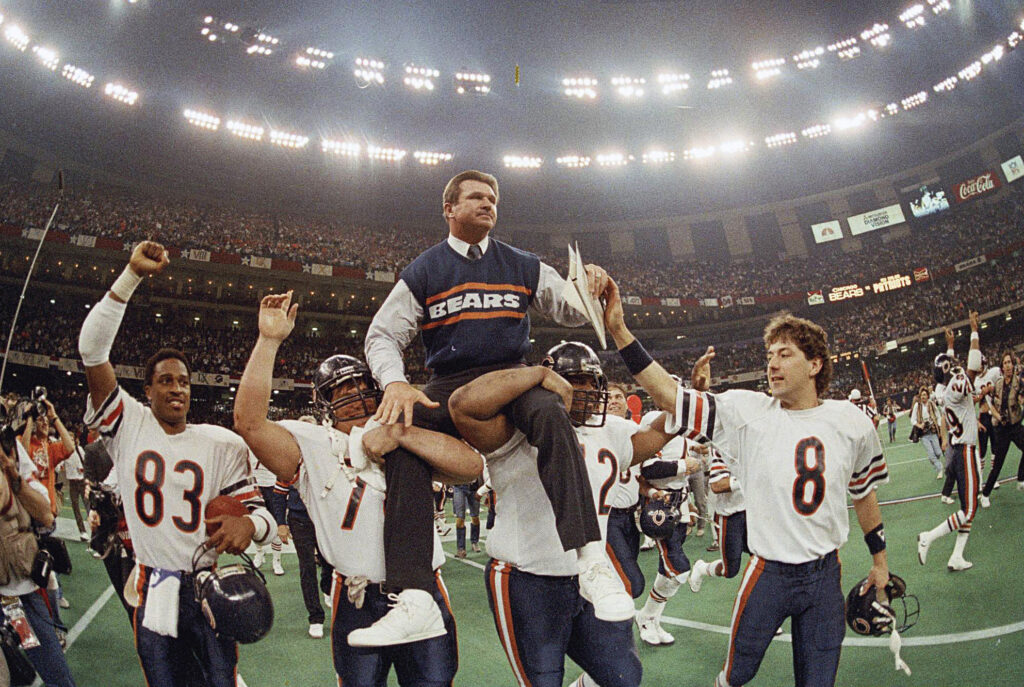 The list of achievements for the Bears franchise is pretty lengthy. For one, they've claimed nine NFL championships — before the Super Bowl era. Since then, the team added a Super Bowl win in 1985 (more on this team shortly). Chicago also holds the NFL record for the most enshrinees in the Pro Football Hall of Fame and the most retired jersey numbers. But most impressive of all, the Bears have recorded more victories than any other NFL franchise.

Part of Chicago's success is because of its long history. The team was founded in Decatur, Illinois in 1919, and moved to Chicago in 1921. It is one of only two remaining franchises from the NFL’s founding in 1920, along with the Arizona Cardinals (who were actually originally from Chicago).

The team hosted games at Wrigley Field through 1970 but now call Soldier Field home. As with several early NFL franchises, the Bears derived their nickname from their city’s baseball team (Chicago Cubs).

Since the charter induction class of 1963, 32 individuals who have played, coached or held an administrative position for the Bears have been inducted into the Pro Football Hall of Fame. Some on the list include longtime owner George Halas, the Galloping Ghost Red Grange, Dick Butkus, Mike Ditka, Walter Payton, and Mike Singletary. The latter three composed the backbone of the 1985 Bears team that lost only one game all year long. Many would argue this was the most dominant NFL team in the history of the game.

We wouldn’t rush to bet on a Chicago Bears Super Bowl victory. Not until we have a better idea of what they have in young quarterback Justin Fields. They selected him in the first round in 2021 so the jury isn’t completely out on Fields in the NFL.

The Bears have their QB 🐻

Chicago trades up for the No. 11 pick and takes Justin Fields. #NFLDraft pic.twitter.com/YcKfGQs612

The quarterback position has been a void for this franchise for the longest of times. Whether Fields changes that or not will have a great influence on Bears Super Bowl betting odds — not only this year but the ones to follow. That’s just the nature of the league right now which is so dependent on premium play from the position.

Where Can I Bet On Chicago Bears Online

Need an online site to take your Chicago Bears-related bets? You’ve come to the right place. These trusted partners are all able to accommodate your betting needs. Read our newest sportsbook reviews to help you pick one that matches what you need most!