They don’t call the Cowboys “America’s Team” for nothing. Dallas has the dual role as the most loved and hated team in the entire NFL simultaneously. But they own one more distinction: being the most bet-on team across popular NFL betting sites. Since everyone has an opinion on the Cowboys, they draw betting money far and wide. Welp, in this guide, we’re going to give you a full breakdown of all things Cowboys betting. This will effectively be your one-stop shop to bet on Cowboys.

If you’re dying to bet on Dallas, then this will be your next chance. Below you’ll find the upcoming Dallas Cowboys game listed, along with current odds.

My Team's Next MatchDallas Cowboys

Want to build a betting plan for the entire Cowboys season? Welp, you’ll need an up-to-date Dallas Cowboys schedule to do so, which you can find below. All 17 Dallas’ games on the year will be featured underneath.

What Are The Current Dallas Cowboys Standings

The NFC East is a tough division, packed with a lot of history. To see which team is leading the way, take a gander at the Dallas Cowboys standings in the widget below. Compare and contrast them with division foes like the Commanders, Eagles, and Giants.

How To Bet On Dallas Cowboys If you’ve never bet on Dallas (or the NFL at large), then this next section is mandatory reading material. We know you’re probably giddy about getting started, but you need to know what exactly you’re getting into. Here are all five different Cowboys odds you’ll come across:

Will the Cowboys win their game? Or will the opponent be victorious? That’s really the only point of a moneyline bet in which bettors simply pick the winning team. That’s all there is to it.

Spreads also have to deal with the game’s final outcome, but there’s more nuance to it. That’s because bookmakers will add a handicap to both playing sides. The favored team must win by a margin HIGHER than their spread in order to “cover the spread.” The underdog, however, can not lose by MORE than their allotted spread. Cowboys betting odds will always be -110 here, whether they’re the favorites or underdogs.

Forgot about the game’s winner when it comes to over/unders. Instead, the only thing that matters in this wager is how many points the Cowboys and their opponent combine for. Bookmakers will set a point total beforehand, giving bettors the opportunity to bet over or under where the actual point total lands.

Props are the perfect way to add variety to your Cowboys betting roll. Variety is the most accurate way to describe props because they can really be any outcome within a game. Examples include how many sacks the Dallas defense gets or an over/under on how many pass completions Dak Prescott gets. Most props are, in fact, around statistics like the examples we pointed out.

Unlike the previously mentioned bets, futures aren’t concerned with what happens in a single game. Instead, futures are about what happens at a macro-level, the whole season practically. Will the Cowboys win the NFC East? The NFC altogether? Or gasp, the Super Bowl? Those end-of-year outcomes are what’s offered in futures betting markets.

Where do you even start with the Cowboys' history? Owner Jerry Jones? Coach Tom Landry? Coach Jimmy Johnson? Quarterback Tim Aikman? Running back Emmit Smith? The point is that Dallas' history is long and storied in NFL lore — to the love of its diehard fanbase and to the chagrin of its endless haters.

The storied franchise began in 1960 when it joined the NFL as an expansion team. Landry was the coach from day one and stayed in the position until 1988. During that timeframe, Landry led the Cowboys to five Super Bowl appearances (two of which they won). 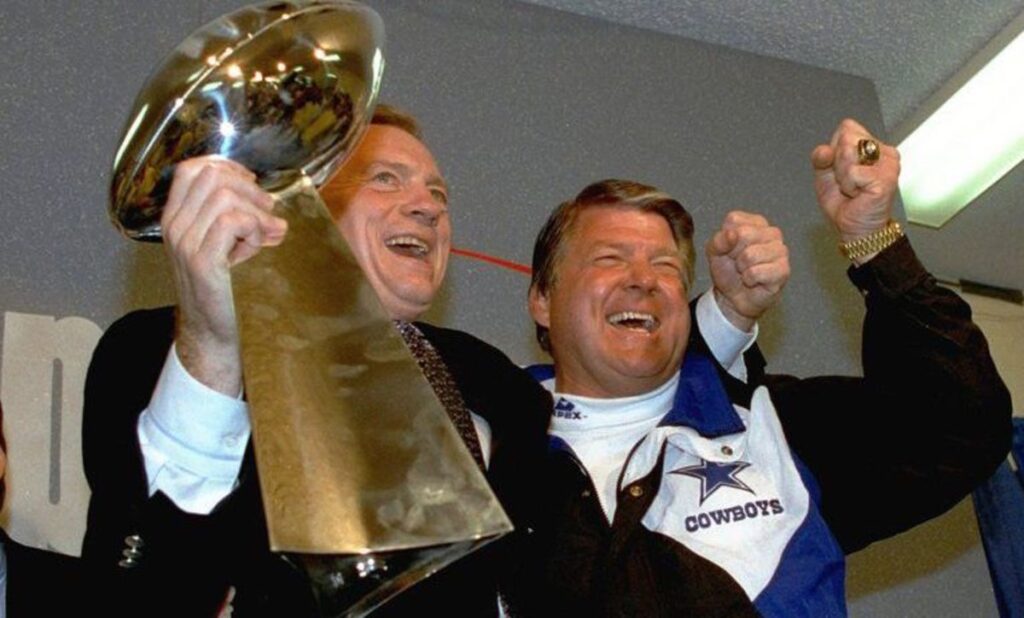 The Landry era ended once another opened — the Jones era. He bought the team in 1988 and canned Landry right away. To replace him, he lured Johnson away from the University of Miami and what followed was another Dallas Dynasty. Behind a dynamic offense that included Aikman, Smith, and Michael Irvin, the Cowboys would win three Super Bowls during the '90s.

It was through all these years of success that Dallas adopted the "America's Team" moniker. Back then, it was the same few teams that were being broadcast on national TV. Cowboys, because of their winning ways, were broadcast across the country and accumulated a fanbase that stretches far beyond Texas.

Here's another factoid to keep in mind: according to Forbes magazine, the Cowboys are the world's most valuable sports property — more than any other NFL or NBA team, or even an international soccer club. Forbes puts their value at $8 billion — an incredible return on investment for Jones who bought the team for $150 million. With the rising value of TV deals, Dallas might soon be the first to reach the $10 billion worth club.

Much has been made about the Cowboys' inability to win a Super Bowl, its last was about 30 years ago in 1995. Welp, if you think that dry spell is about to end, then you need to get your hands on Cowboys Super Bowl betting odds. Every team will have its own odds to win, and with so many betting options (32), the futures lines themselves will be on the long side. But that just means a better payout in the event a Dallas Cowboys Super Bowl win indeed happens.

Be cognizant that these Super Bowl odds are prone to seismic shifts. Bookmakers will update the lines — for not just the Cowboys, but the other 31 teams too — as new information becomes known. That could be a new free-agent signing, an injury to a star player, or an impressive win over a good team. Super Bowl lines are available as soon as the previous “big game” ends so monitor how Dallas’ odds shift as the season progresses.

Where Can I Bet On Dallas Cowboys Online

Ready to bet on or against the Dallas Cowboys? Welp, you'll need a trusty bookmaker to do so. In the below table, we've featured our top bookie recommendations. The table has up-to-date sportsbook reviews so you can know what awaits you at these sites beyond just Cowboys odds!