After a prolific career in Seattle, Russell Wilson has been shipped away to Denver. And with that, the Seahawks usher into a new era — that for now, remains led by coach Pete Carroll. This webpage will be your “best bet” for all things Seahawks betting. We’ve loaded it up with information to help you out, including the Seattle Seahawks schedule, odds, and best practices when gambling. Keep reading if you’re ready to make money at NFL’s top-used betting sites! 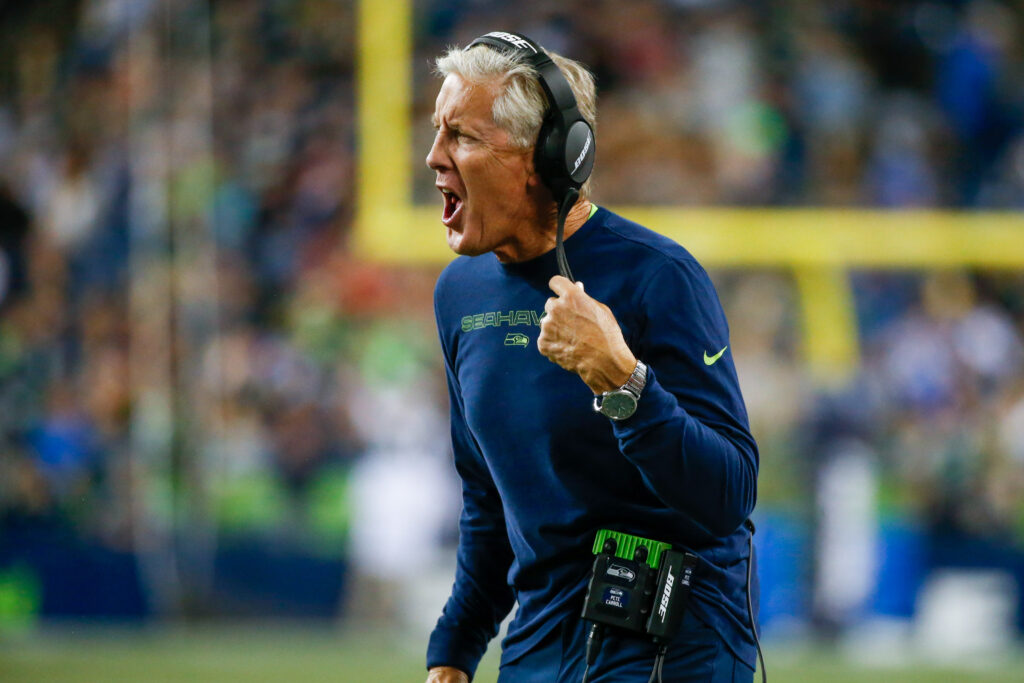 Athletes often like to say: “We’re taking it one game at a time.” The widget will help bettors do the same when it comes to betting on Seattle. You’ll find the next Seattle Seahawks game every time below.

My Team's Next MatchSeattle Seahawks

Some parts of a schedule are much more difficult than others. This widget will help bettors find those spots for the Seahawks over the 17-game season.

What Are The Current Seattle Seahawks Standings

Don’t just focus on the Seahawks in the NFL pecking order. Notice the entire lay of the land — in the NFC West, the whole conference, and even the league. Below you’ll see the Seattle Seahawks standings in full!

How To Bet On Seattle Seahawks

Betting opportunities on the Seahawks during the season are almost never-ending. However, not all are created equal. There are about five different types of ways to bet on Seahawks. The five are as follows:

Spreads are, without question, the most popular bets revolving around the team. This bet isn’t just about whether Seattle wins or loses, but more specifically, by how much. The favored team must win by a certain point total — this is the spread. Vice-versa, the underdogs can’t lose by more than a set number of points.

Alright, this is the bet where you can simply bet on the outcome of Seattle’s game — win or lose, that’s it. Whereas betting lines of -110 are common on spreads, Seahawks odds on moneyline will be more erratic. For example, if they’re big underdogs, then expect a large plus-moneyline.

If you’re not sure whether Seattle will win or lose (and by how much), then over/under is likely the Seattle Seahawks betting lines for you. This wager is concerned strictly with the point total — not just the Hawks, but its opponent too. This wager is as simple as picking whether the teams will combine for more (over) or less (under) points that were pre-set by bookies.

No bet type has more options than props. That’s because, well, props can be bets on any outcome inside of a game. These are mostly side bets on statistical outcomes, such as over/under on how many passing yards a quarterback earns or likewise, yards gained by a running back. Props are a great way to spice up the betting routine.

Futures are not wagers surrounding single games like the previous bet types. They are wagers mostly on season-long outcomes such as whether the Seahawks will win the Super Bowl (more on that shortly) or whether an individual player will win an award. As the name indicates, these are future events.

We want you to make money off Seahawks betting odds — no matter the wager type. That’s why we’ve created three hard rules for doing so. One of our tips is specific to the franchise, but the other applies to wagering on the NFL in general.

The Seahawks joined the NFL as an expansion team in 1976. They are one of four teams in the West Division of the National Football Conference and the only NFL team situated in the Pacific Northwest where they have won 10 division titles, three conference championships, and a Super Bowl (2013). They are the only team to have played in both the AFC and NFC championship games. Seattle is also the first, and only, post-merger expansion team in NFL history to play in consecutive Super Bowls.

They are also the only team in league history to make the playoffs with a losing record when they went 7-9 to win their division in 2010.

Seattle has played their home games since 2002 at the now-named Lumen Field, which is also home to the 12th Man, their ear-piercing fans. The Seahawks’ fans have twice set the Guinness World Record for the loudest crowd noise at a sporting event — first on Sept. 15, 2013, registering 136.6 dB during a game against the San Francisco 49ers and again on Dec. 2, 2013, during a Monday Night Football game against the New Orleans Saints, with a new record-setting 137.6 dB.

Until Seattle establishes who the long-term quarterback will be post-Wilson, we’d expect the Seahawks odds to win Super Bowl to remain long. As they say, the NFL is a quarterback-driven league and that’s almost always reflected in the Seahawks Super Bowl odds for betting.

All three times that the franchise did play in the Super Bowl were with team legends at the position. The first was Matt Hassleback and the latter two were with Wilson. Until another legend is under center, we’d stay far, far away from any betting lines on Seattle Seahawks Super Bowl.

SEATTLE, I Love You.

Where Can I Bet On Seattle Seahawks Online

Journey downward to see the best places to bet on the Seattle Seahawks. You can’t go wrong with any of our partners, so gamble on the Seahawks with unequivocal confidence. We have detailed sportsbook reviews of each site listed underneath.