The Buccaneers received new life when Tom Brady chose to continue his career with the franchise over other suitors in 2020. Brady made Tampa Bay an overnight commodity and now Tampa Bay is one of the most popular choices at top NFL betting sites. This is why we’ve crafted this personalized Buccaneers betting guide to help you out. Keep reading and you’ll have all the tricks of the trade to successfully bet on Buccaneers for years to come.

Use this feature to track the next Tampa Bay Buccaneers game. This will be your next chance to make money off Bucs betting.

My Team's Next MatchTampa Bay Buccaneers

The entire Tampa Bay Buccaneers schedule is listed in this widget. Use it to meticulously plan out your long-term bets beyond this upcoming Sunday.

What Are The Current Tampa Bay Buccaneers Standings

The Bucs are apart of the NFC South, alongside the Falcons, Panthers, and Saints. You can see the Tampa Bay Buccaneers standings in the table below — not all divisionally, but across the whole NFL.

How To Bet On Tampa Bay Buccaneers

Not all Buccaneers betting odds will be created equal. Each will vary— not only in the odds but the actual goal of the bet. Allow us to explain the five different Bucs bets you’re likely to come across:

We’ll start off with the most simplest of Tampa Bay Buccaneers betting lines. Moneyline is just about picking the straight-up winner of the game, that’s it. It could be the Bucs or its opponent, the decision is on you!

Of all Buccaneers odds, the most commonly bet-on one are spreads. In this wager, bookmakers will give Tampa a handicap to play with. Say they’re betting favorites (often with Brady), then the Bucs can’t just win to cash this bet. No, they must win by a point margin higher than the spread. The opposite applies if they’re underdogs, where they can not lose by more than the spread.

If you’d rather not concern yourself with bets on Tampa winning and by how much, over/under is a perfect alternative. This wager focuses squarely on the combined point total of both the Buccaneers and its opponent. Bookies will set a number beforehand and a bettor must choose over or under the final tally actually being in. Over/under bets can be made on the total score after four quarters or each of the halves too.

Prop bets are much more open-ended. These bets care little about the final game result. Instead, mini-events and stats within the game are what make up the majority of props. Examples include over/under on touchdown passes by Brady or picking which player scores the first touchdown of the game on either team. You’ll find more prop bets available on Bucs games than in any other category.

What separates futures from the aforementioned bet types is the time period it takes to get paid out. The other bets revolve around single games but futures are about end-of-the-year results. Do the Bucs win the NFC? Is Brady named league MVP? It could take weeks, months, or even up to a year to cash a futures bet depending on when you made it. The point is, these bets are made on distant outcomes beyond just one game. While we can’t make Bucs betting picks on your behalf, we can share wisdom that can guide you along the way. We’ve picked up these valuable lessons through years of countless betting. They’ve served us well and if implemented, we believe the same could be the case for you:

Along with the Seattle Seahawks, the Buccaneers joined the NFL in 1976 as an expansion team. The franchise got off on a historically bad foot, losing 26 straight games between 1976 and 1977, which remains an NFL record. Aside from a surprisingly successful 1979 campaign, which included winning the division title, playoff game, and playing in a conference championship — the first post-merger expansion to do all three — more misery followed the franchise thereafter.

At one point, Tampa Bay had 14 consecutive losing seasons through most of the '80s and '90s. At the time, it was completely correct to call the Bucs the worst NFL franchise of all. Today, though? That's not even close to accurate. That's because the team has claimed two different Super Bowls in a two-decade span.

The first team to do so was the 2002 Bucs — led by an imposing defense and offensive-minded head coach Jon Gruden. In the Super Bowl, Tampa Bay smacked the Raiders, who were coached by Gruden the year before, to hoist their first title. In a rare NFL ordeal, the Buccaneers "traded" for Gruden the prior offseason. It took a treasure trove of picks (two first-rounders and two second-rounders) and $8 million to get Gruden, but that deal paid dividends immediately. 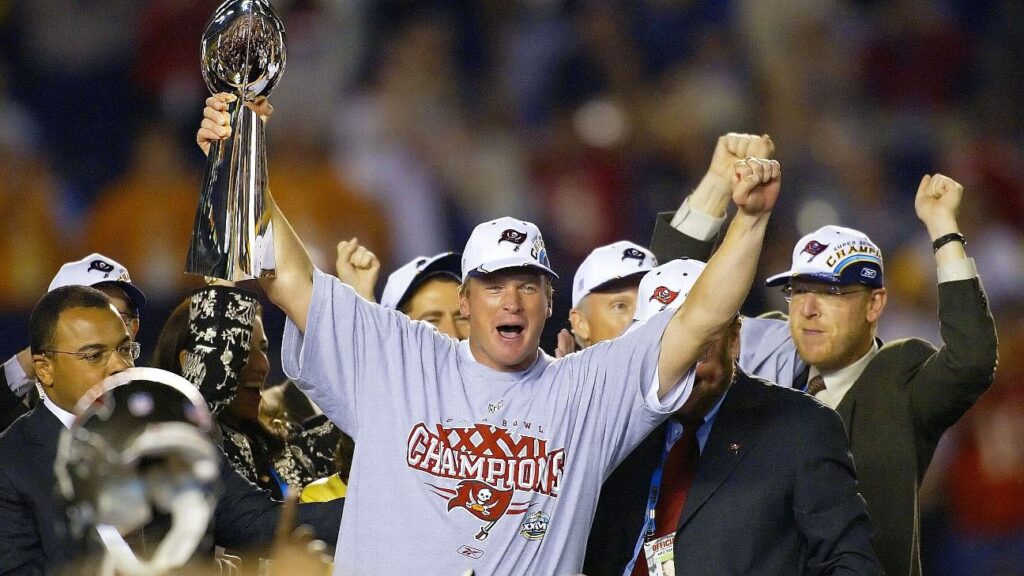 Tom Brady would lead the way in the franchise's second-ever title. In his first year without Bill Belichick and New England, Brady transformed Tampa from a non-playoff to the champions of the world. Brady remains with the franchise, which leaves hope for Super Bowl No. 3 (more on that shortly).

As long as Brady is in the fold, expect the Buccaneers Super Bowl betting odds to be among the highest in the league. That’s just the respect you have to give a seven-time Super Bowl winner, which Brady is.

Of course, how long Brady sticks around is the big question mark. We already saw him feint retirement once so at least the thought of it is present in his mind. He’s closer to 50 years old than 40 now too, which only increases the likelihood of his illustrious career ending. Without Brady, the chances of a third Tampa Bay Buccaneers Super Bowl will become longer at bookies, almost guaranteed.

Where Can I Bet On Tampa Bay Buccaneers Online

Come back here whenever you need recommendations on where to lay down Tampa Bay Buccaneers wagers. Our tool makes it easy to find a reputable site. Read our in-depth sportsbook reviews to compare sites against each other so you're making the best decision possible!