Without question, no NFL franchise has been more dysfunctional as of late than Washington. Where do we start? Three names in three years? Strong allegations against the owner Dan Snyder? Stadium falling apart? But hey, none of that has stopped the now-named Commanders from being a commodity at top-used NFL betting sites. Afforded the luxury of playing the nation’s capital, Commanders betting is hard and heavy, hence why we’ve created this betting guide. We’re giving you an in-depth look at what it takes to win at Washington Commanders betting lines.

The next Washington Commanders game is listed below (we update this every week). This will be your next chance at betting on the team.

My Team's Next MatchWashington Redskins

The full Washington Commanders schedule is listed below. Knowing all 17 games will help you plan a long-term betting strategy based on bye weeks, road trips, and more.

What Are The Current Washington Commanders Standings

The NFC East is historic featuring some of the winningest teams in league history — the Cowboys, Commanders, Eagles, and Giants. You can track the ongoing divisional battle with our Washington Commanders standings widget underneath.

How To Bet On Washington Commanders Don’t freak, Washington betting isn’t as overly complicated as it may seem at first glance. We’re going to give you a quick rundown of all five categories of Commanders odds you’re most likely to come across. Let’s jump in:

If you just want to pick whether Washington wins straight up or not, then the moneyline will be your cup of tea. That’s all there is to this bet. Though, the odds will swing from game to game. You might see the Commanders favored one game (- sign before their odds), but double-digit underdogs (+ sign) the following week. That’s just the nature of moneyline odds with an unpredictable team like Washington.

Spreads are a different take on the moneyline. This bet puts a handicap on each side. The favorites must win the game by more than what the spread is “to cover” and cash the ticket. However, the underdog team must keep the game within the spread (or win outright) to cover on their end.

If you want a different way to bet on Commanders that doesn’t involve whether they win or not (and by how much), then look into over/unders. This wager is also focused on the score, but specifically on how many points Washington and its opponents combine for. Bookies will set a ballpark number and bettors choose whether the final figure is over or under that bet. Over/unders can apply to individual quarters, halves, or the full game.

Props are perhaps the most opened-ended way to go about Commanders betting. That’s because there are unlimited options here and each prop differs. However, you can think of props as “side” bets on events within a game. Who scores the game’s first touchdown? Over/under on passing completions? A field goal longer than 49 yards? All those questions could be found in the prop market. As you can see, most props are statistical in nature.

Futures are very different than the previous wagers in one important way: the time horizon. You could wait weeks, months, or even a year for a futures bet to be decided. That’s because most of these bets are on seasonal outcomes on Washington such as whether they win the NFC East, conference, or gasp, the Super Bowl.

Winning won’t “just happen” in betting — well not consistently at least. You can win some bets by "winging it", but being a long-term winner takes methodology or plan of some sort. The plan can be as simple or as elaborate as you want it, but there still needs to be something underpinning your wagers. If you need help in this regard, we have three valuable tips that have helped us over the years:

If there's one thing that's been a constant for this franchise, which dates as far back as 1932, its name changes. They've been called the Boston Braves, Boston Redskins, Washington Redskins, Washington Football Team, and now the Washington Commanders, which is supposed to stick around. The Redskins name came under scrutiny (it's a slur aimed at Native Americans), which forced the permanent name change to Commanders in 2022.

Enough about nicknames, though, because this franchise has a lot of history, plenty of it good history. Washington has won five championships — three of them Super Bowls and another two NFL championships long before the merger. It's collected 15 division titles and 25 playoff appearances. Most of this success started when the team left Boston for Washington in 1937, where it stayed put in the nation's capital.

Being in such a large market has made Washington one of the most valuable franchises in the NFL, and all of sports in general. Forbes estimates its value at $5.6 billion, which is the sixth-most in the entire NFL.

Many legendary players and coaches have carved out their careers with the Commanders.  We'll begin with the coaches — George Allen and Joe Gibbs both come to mind. The latter recorded a 124-60 record with the franchise, which puts his winning percentage at 68, one of the highest in NFL history.

When it comes to players, you can start with the ones who have their number retired — Sonny Jurgensen (#9), Sean Taylor (#21), Sammy Baugh (#33), and Bobby Mitchell (#39). Right up there in franchise importance are the likes of quarterback Joe Theisman, cornerback Darrell Green, wide receiver Art Monk, and the list goes on and on.

All this past success is why fans are maddened by the franchise's current state. Since the turn of the century (when Snyder became the owner), Washington has made the playoffs just five times and won just one postseason matchup. 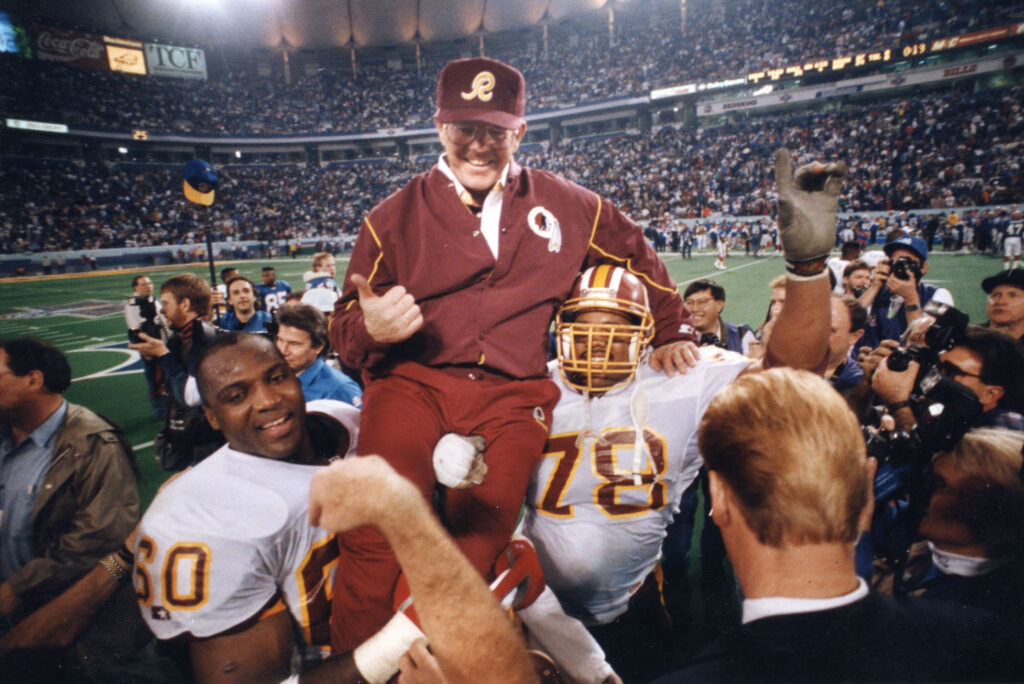 It’s been 30 long years since the franchise won a Super Bowl. As we covered before, there’s futures bet on Washington winning it once again (as well as the other 31 NFL teams). These Commanders Super Bowl betting odds are up all year long and change as the season progresses based on injuries, game results, and other new information.

However, we wouldn’t advise rushing to wager on a Washington Commanders Super Bowl win. Not until this team can find some type of footing. Rarely do teams go from afterthoughts (what Washington is right now) to Super Bowl contenders, less winners. If the Commanders can string multiple years of gradual success, then it’s worth getting serious about their title futures.

Where Can I Bet On Washington Redskins Online

Check out the below widget to see where you can bet on Washington. All of these sites are reputable names in the betting industry, as detailed in our unbiased sportsbook reviews. Your money is in good hands at any one of the sites.